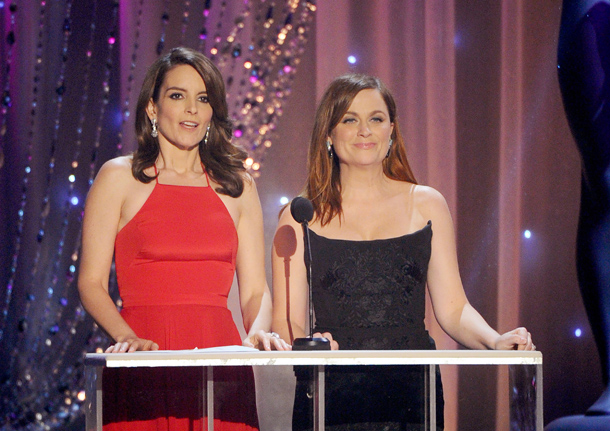 They were honored jointly in the best guest actresses in a comedy series category at Saturday’s creative arts Emmy ceremony.

Fey and Poehler won as co-hosts of last year’s Christmas episode on “SNL.’’ The pair didn’t attend the Los Angeles event, and Bob Newhart accepted the Emmy on their behalf.

The Emmy was the first for Poehler but part of a collection for Fey. She’s won eight times before, including acting and writing trophies.

Peter Scolari was another first-time Emmy winner: He captured the best guest actor in a comedy series award for “Girls,’’ in which he plays dad to star Lena Dunham.

Scolari became a contender after another nominee, Peter MacNicol of “Veep,’’ was found to be ineligible because he had appeared in half of the series’ episodes, more than permitted for the category.

“Well, I’d just talked myself out of it, too,’’ he said in his acceptance speech.

Diane Warren won the Emmy for best original music and lyrics for “Til It Happens to You,’’ Lady Gaga’s song from the documentary “The Hunting Ground,’’ about campus rape. The song also was an Oscar and Grammy nominee.

The creative arts Emmys precede the main ceremony, which is scheduled to air on Sept. 18, on ABC. AP