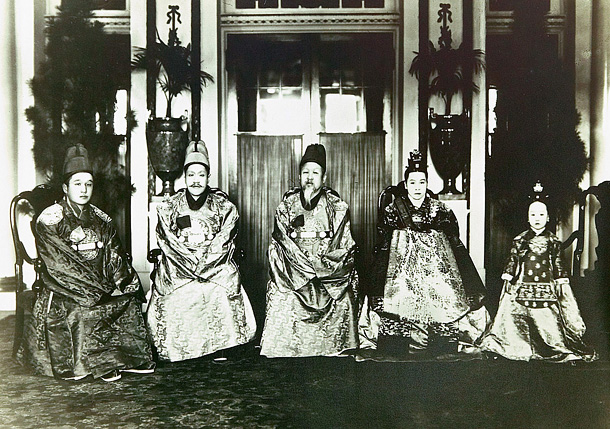 Koreans have probably never been as interested in the last royalty of Joseon Dynasty (1392-1910) as they are now.

There have been slow but conspicuous scholarly attempts in recent years to re-examine the final years of the fallen dynasty - usually considered a shameful period of Korean history.

But with last month’s release of “The Last Princess,” a film about Princess Deokhye (1912-89), many Koreans are demonstrating a curiosity and even affection toward the royal family, who they really were and what it would’ve been like to be them.

The film, which is highly fictitious, is based on the princess’s tragic life. She was the daughter of King Gojong of the Joseon Dynasty, who was also the first emperor of the Korean Empire (1897-1910).

On the heels of the film’s release and increased interest in the royals, the country’s state-run institutions have organized various activities about the last royalty of Joseon.

The Cultural Heritage Administration said last week that it has opened to the public the tombs of Deokhye and her older stepbrother, Prince Euichin (1877-1955) - both in Namyangju, Gyeonggi - and is holding a photo exhibition of the princess and the prince near the tombs, which will be open until the end of November.

The National Gugak Center over the weekend held a performance that re-enacted court music of the Korean Empire (sometimes translated as Daehan Empire) based on the 1907 album released by Victor Talking Machine Company, an American record company that existed between 1901 and 1929.

Historians say it’s high time now that Korea look hard and square at the rather grim and depressing era of its history - the late 19th century to early 20th century, and in that sense increased interest and active debate in that specific period of Korean history is a positive thing.

While there are those that argue that the last monarchs of Joseon weren’t as incompetent and selfish as previously thought, there are also those who are concerned with how others try to glorify the last royalty of Joseon and even portray them as fallen heroes.

The Korea JoongAng Daily examined the debate on the assessment of the last royalty of Joseon. 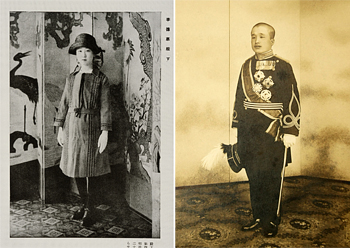 Left: Princess Deokhye in 1924 Right: Prince Yeongchin in 1920 The two, who were educated in Japan, are portrayed in the recent film “Last Princess” as connected to the independence movement, despite there being no historical evidence of this. [CULTURE HERITAGE ADMINISTRATION, JOONGANG PHOTO]

“The need to fill the void in history even with fiction is simply so freaky and perverted,” film critic Hwang Jin-mi said of the film “Princess Deokhye.”

While acknowledging that the film is fiction, she said she deplores how the film portrays Deokhye as someone different from the real Deokhye and by doing so attempts to back up the argument that there wasn’t much that the Joseon royalty could do and like the commoners, they too felt the agony and the sorrow of losing a country’s sovereignty.

In the film, which has sold more than 5.5 million tickets, Princess Deokhye, among others, is portrayed as the patron of independence fighters. She resists Japan’s attempt to instill a Japanese mindset and way of living in Joseon royals and endorses independence movement. She is seen building a Hangul (Korean alphabet) school in Japan, and giving an inspirational, powerful speech to Korean laborers in Japan.

But looking into the life of the real Deokhye, she hardly had a chance to be that. She moved to Japan at the age of 13 to be educated there, as was the case with all Joseon royals during the Korean Empire. She was diagnosed with schizophrenia in her late teens. She married a Japanese duke in 1931.

After Japan surrendered to the Allies in 1945, Deokhye was placed into a mental institution in 1946 and her husband divorced her while she was still there in 1956. She wasn’t allowed entry into Korea until 1962. In 1989, she died in her residence in Changdeok Palace, having never regained her sanity.

Not only was she mentally unstable for most of her life, but she was actually born after the Japanese colonization of Korea (1910-45) began so developing such an anti-Japan sentiment would’ve been hard, critics say.

“Because Deokye was young when she was exposed to Japanese culture, it’s hard to say that she developed a independent mindset or consciousness against Japan,” said Jang Myeong-suk, a professor at Sangmyung University who studies the era.

She also lived under the close protection and surveillance of Japan before Korea’s liberation in 1945, making slim the possibility of going out of her comfort zone to engage in resistance activities.

Critic Hwang argues the film would have been just fine portraying Deokhye just as she was, instead of forcing a fictitious image of an independence fighter on her.

“The musical ‘Elisabeth’ is about Empress Elisabeth of Austria as her empire crumbles at the turn of the century. It doesn’t overdo it by glorifying her as a hero of an independence movement, but rather simply tells a story of a sad, depressed female individual… It’s bleak yet it is highly moving, ” she said. 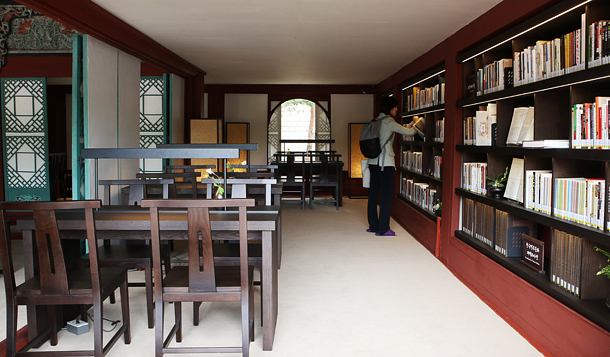 Jipokjae, inside Gyeongbok Palace, which used to be King Gojong’s library, has been transformed into a book cafe. Some scholars say the structure is evidence of the king’s attempts to enlighten and modernize Korea. [CULTURE HERITAGE ADMINISTRATION]

Why is this debate about how fictitious the princess is in the film important? After all, filmmakers certainly have the freedom to imagine and invent history and fantasy.

One reason, according to pundits, is that more than ever, Koreans learn history from film, drama, novels, cartoons and plays - and not from history books.

“Filmmakers are historians too,” Lim Ji-hyun, professor of history at Sogang University said, “because many people learned about the Holocaust through the film ‘Schindler’s List.’” Lim said that their act of making films is “an act of making historical narrative” and therefore they should feel a sense of responsibility.

He added that these days he’s interested in the field of “public history,” something that reframes historical questions.

The term, according to the history department of New York University, refers to “history that is seen, heard, read, and interpreted by a popular audience… and also history that belongs to the public.” Public historians expand the realm of traditional history, the definition says, with non-traditional presentation formats. Filmmakers fall in the category of public historians in that sense.


Another reason this debate over Princess Deokhye is important is that it’s actually a continuation of a decade-old debate on how to view the last royalty of Joseon, mostly King Gojong, which ignited with the turn of the millennium.

Conservative historians led by Yi Tae-jin of Seoul National University have been arguing since 2000 that King Gojong actually was an “enlightened despot” who made various attempts to modernize Korea. With his books and dissertations, Yi has been arguing that the general view that Gojong was incompetent and Joseon was destined to fall is all the result of Japan’s manipulation.

Around that time, Queen Min (also known as Empress Myeongseong, as the Joseon Kingdom transformed into Korean Empire in its final years) was also packaged with a new image. Before, evaluation of her was mixed.

In 2001, the KBS drama “Empress Myeongseong” portrays her as a strong, competent woman. In the drama, as she gets slashed by Japanese assassins she displays courage and says solemnly “I am the mother of the state Joseon,” and the queen even today is associated with that famous line.

Yeoju, Gyeonggi, where she was born, also uses her heroic image to promote the region. The slogan in her memorial there describes her as the “iron lady that changed the history of Joseon into a victorious one.”

Still, some are highly critical of giving such a positive evaluation to Korea’s last monarchs.

Rhee Young-hoon, another conservative scholar at Seoul National University, is one of the most vocal.

The economics professor usually presents a theory based on his analysis of the economies of Joseon Dynasty and Korean Empire. For instance, he examined the state budget of the Korean Empire and found that a large amount of it went into a luxurious lifestyle: protocol, ritual, banquets and expanding palaces.

“Gojong didn’t know what he should to do sustain his kingdom,” he said at a recent forum.

For Joseon to survive at that period, Rhee argued, Gojong had to transform the kingdom into a constitutional monarchy, make people the principal agent of the nation’s sovereignty and establish a parliament. He also should have introduced a conscription system to strengthen national defense.

“Sadly, Gojong just wasn’t an enlightened monarch enough to assume any of that historical responsibility,” he said. He said that he repressed all political attempts to streamline national authority into a constitutional monarchy, because to Gojong the kingdom was “nothing more than a family fortune he inherited.”

A 2006 MBC drama, “Princess Hours,” is set in a Korea that is governed by a constitutional monarchy.

It’s quite an imagination to have a king and a queen again in Korea. But, there is a man who is dreaming that Korea is just that and also actually working to achieve that.

Yi Seok is the grandson of King Gojong. He runs the Seunggwangjae residence in Jeonju, North Jeolla, where he teaches visitors the royal history and culture of Joseon, which was ruled by the Jeonju Yi family. Yi is the son of Prince Euichin, the stepbrother of Princess Deokhye.

Seunggwangjae translates to “the house that carries on the will of Emperor Gojong.”

Since 2006, Yi been collecting supporters to revive Joseon’s imperial household and introduce a constitutional monarchy. He says he’s collected more than 10,000 supporters. He calls these supporters “independence fighters.”

“Korea needs a royal family for symbolic reason,” he told JoongAng Ilbo in a recent interview. “Only then will Koreans’ spirits be united. The royal family can be their spiritual leader.” He added that if the imperial household is revived, history, culture and traditions can be better preserved in contemporary society.

Yi was born in 1941, decades after the royal family lost power but before it was expelled from its royal palaces. “It’s been less than 100 years since the imperial household was gone. The five palaces in Seoul are still there. So it’s only right that [the government] allows the descendants of the royal family live there,” he said.

“That way, the kingdom can carry on,” he said.