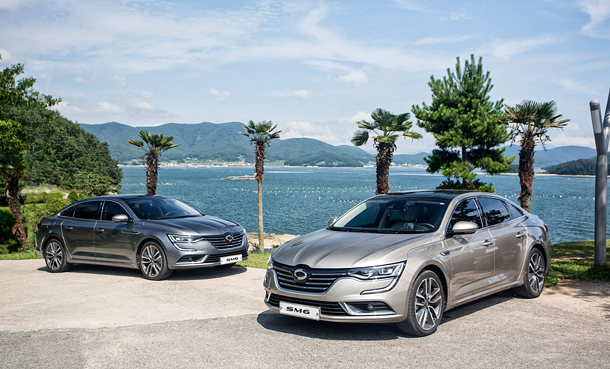 Just when the hype over the SM6, Renault Samsung’s well-received midsize sedan, was settling down, the Korean unit of the French carmaker released a diesel-engine version, the SM6 dCi, in August.

The strongest suit for this premium midsize sedan is its fuel efficiency, which according to the official record, is 17 kilometers per liter (40 miles per gallon). When actually driven, the efficiency can go much higher. On the premise that the car travels 17,000 kilometers in one year, it will take only 1.2 million won ($1,091) to fuel the car - 160,000 won less than for a similar hybrid vehicle. When compared to gasoline-run vehicles, this car can save up to 800,000 won per year.

When actually driven from Seoul to Busan, about 450 kilometers, only one third of the tank was used. The model’s starting power, however, isn’t as good as the company’s claims. It takes a while for the engine to warm up and thrust the car forward. It produces 110 horsepower at 4,000 rpm.

Once it gets up to speed, the driving experience is quite smooth. The noise, which is often a critical defect of diesel cars, is well handled, especially when driven faster than 100 kilometers per hour. The latest model has sound-insulating glass for the windows to reduce noise.

Exterior design is another strong point, as it is for the SM6 models equipped with gasoline engines.

The front has a strong look with its signature “storm’s eye” logo and a chrome grille that stretches all the way across the front, giving it a solemn look. A C-shaped LED-light in the front gives sophistication. The 3-D LED rear light, which is wide but sleek, harmonizes well with the vehicle’s overall design.

However, there were some inconvenience while driving, especially for a beginning driver.

The vehicle has a function called auto-stop, which turns off the engine when stopping for a length of time, like waiting at a stoplight. When you press the accelerator slightly, the engine is supposed to return to life, but it didn’t always do so on our test drive.

A skilled driver could have patiently turned on the engine despite the angry honking from behind, but a beginner could panic - and that could lead to a more dangerous situation. In order to prevent it happening again, the reporter kept pressing the accelerator gently at stoplights.

Another problem is the automatic switch to a parking brake safety option which halts the car even if the gear is in driving mode. A parking brake in other cars is usually manual. For this model, the brake operates automatically whenever the car is in parking mode.

When the reporter mistakenly shifted the gear to parking mode, the parking brake kicked in. Even after the reporter released the brake by pushing a button, it took more than three seconds to switch back. That kind of delay in the middle of a hectic parking lot, such as in the basement of a department store, would be unacceptable.

All in all, the SM6 dCi equipped with 1.5 liter diesel engine is an economical vehicle with an excessively elegant exterior design.

The price starts at 25.8 million won.