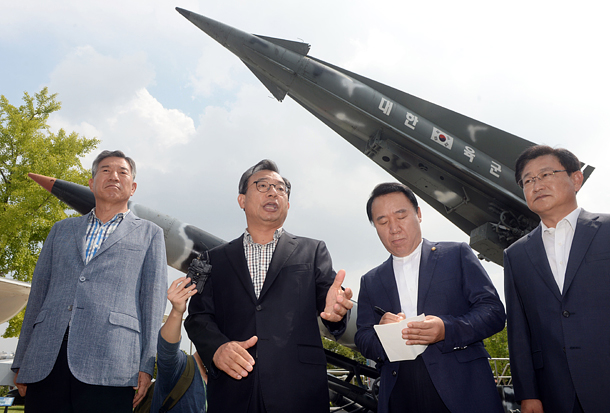 Ruling Saenuri Party Chairman Lee Jung-hyun, second from left, condemns North Korea’s fifth nuclear test and calls on the government to bolster its security policy in front of an outdoor exhibition of large weapons at the War Memorial of Korea in Yongsan District, central Seoul, on Sunday. [NEWSIS]

President Park Geun-hye will hold an emergency meeting today with leaders of the ruling and two main opposition parties at the Blue House in the wake of North Korea’s fifth nuclear test Friday to discuss how to respond.

The meeting, to be attended by Saenuri Chairman Lee Jung-hyun, Minjoo Chairwoman Choo Mi-ae and People’s Party’s acting chief Park Jie-won, comes three days after the North conducted its most powerful underground nuclear test at the Punggye-ri nuclear site in North Hamgyong Province. The North said it had met its goal to put a nuclear warhead atop a ballistic missile to target hostile forces overseas.

The meeting, to be held at 2 p.m., is the seventh of its kind in the four years of the Park government. On Friday night, hours after the test, Park released an unusually thorny statement about North Korean leader Kim Jong-un, describing him as “out of control,” intent on “disregarding any advice from the international community and neighboring countries,” and characterizing his government as a “tyranny.”

Park also described the test as a “direct challenge” to the international community and said her government’s patience was “wearing thin.”

Calling her a “traitor,” a “hideous confrontation maniac” and the “nation’s biggest trouble-maker,” the North’s National Reconciliation Council said in an English statement carried by the Korean Central News Agency that the North Koreans “have on record all the invectives and crimes committed by Park against the DPRK and will thoroughly and mercilessly punish her on the day when the great victory of the national reunification will be won.”

Park’s stern remarks suggested continued pressure on the North to change its course and a refusal of any dialogue unless Pyongyang shows an intention to change its ways, a stance that has won her support from conservatives.

That stance, however, also has been criticized for worsening inter-Korea relations and making Pyongyang more determined to improve its nuclear and missile arsenal.

“With its decision to close down the joint Kaesong industrial complex (in February), the Park government made clear its North Korea policy would be a full implementation of sanctions and pressure to force the North into submission. Its message has been clear that it will not recognize the North as a partner for dialogue anymore unless it stops provocations,” Koh Yu-hwan, a professor of North Korean studies at Dongguk University, told the Korea JoongAng Daily Sunday. Koh said it would be a non-starter to expect the Park government to backtrack from its current stance as it would be seen as an acknowledgement that its North Korea policy has failed.

Minjoo Party Chairwoman Choo has demanded Park meet with party leaders since her election to the party’s top post last month, saying they should sit at the table to discuss improving people’s livelihoods and reviving a stagnant economy. At the table with Park Monday, Choo is expected to express her opposition to the U.S.-operated missile defense system, known as Terminal High Altitude Area Defense (Thaad), to de set up in Seongju County in North Gyeongsang by the end of next year.

Rep. Park Jie-won, one of the four attendees, also indicated Sunday he would voice his objection to the Thaad deployment on the grounds that it would not help Seoul win support from Beijing to dissuade Pyongyang from its nuclear endeavors.

Ruling Saenuri Party Chairman Lee, during a visit to the War Memorial of Korea in Yongsan District in central Seoul, said to reporters, “We need to deliberate a much stronger level of response to North Korea’s provocations such as its nuclear and missile development program.”

He continued, “It is necessary for the government to show efforts that it will become completely united over the security issue as it must not misjudge North Korea’s Kim Jong-un.”

New information on the North’s fifth test emerged Sunday. Ji Hun-cheol, director of the earthquake center at the Korea Institute of Geoscience and Mineral Resources, told the JoongAng Ilbo that the Friday test occurred 750 to 770 meters (2,460 to 2526 feet) underneath the tip of an unnamed mountain.

According to Ji, the fifth test was done 400 meters east of Mt. Mantap, where the fourth test took place in January.

The Friday test was estimated to have produced 10 to 15 kilotons in yield based on the 5.0-magnitude tremor it caused, the most powerful yet. A yield of 1 kiloton is equivalent to the force of 1,000 tons of TNT.

The nuclear bomb that was dropped on Hiroshima on Aug. 6, 1945 produced 15 kilotons of yield, and killed an estimated 130,000 people, though the exact death toll of mankind’s first nuclear attack will never be truly known.

Still, nuclear experts say Pyongyang appeared to have taken a step toward mastering technology to mass produce nuclear weapons that are light and small enough to be mounted on top of a ballistic missile to target not only U.S. bases in the Pacific but also the Continental U.S. Pyongyang’s upgrade in its nuclear capability was acknowledged by the intelligence agency in South Korea, which reported to lawmakers Friday that the pace at which the North was developing its nuclear program was faster than previously estimated by the South Korean military.

With rising concerns over the North’s nuclear capability, the nuclear-powered USS Ronald Reagan and other U.S. Navy warships including the Curtis Wilbur, John S. McCain, Fitzgerald, Stethem and Barry will partake in a joint naval exercise slated from Oct.10 to 15 in the Yellow Sea, according to Yonhap News Agency. The exercise will test the allies’ naval fire power to target military and missile facilities in the North.