Poor safety at kids’ cafes ends with injuries and a death

Poor safety at kids’ cafes ends with injuries and a death 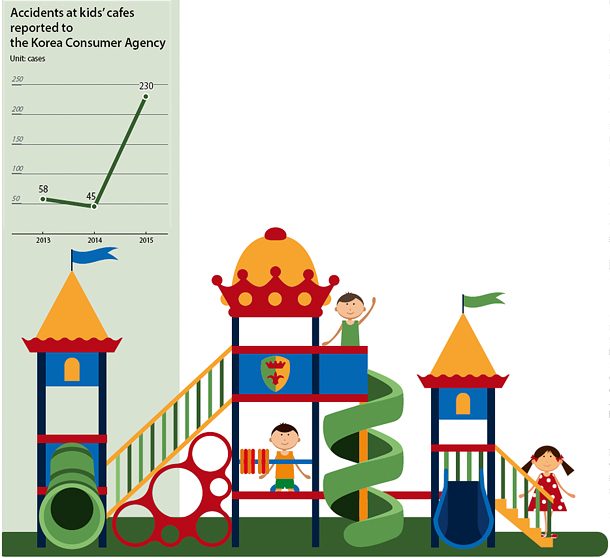 The recent death of a 5-year-old who drowned in a lake outside a kids’ cafe in southern Seoul’s Olympic Park is creating a public outcry against the lax safety and security measures prevalent at many kids’ cafes throughout the country.

The boy, surnamed Moon, suffered from a slight learning disability, yet nobody stopped him from exiting the cafe’s doors while his mother was talking with other parents. There was no safeguard system at the doors to keep kids inside. Moon’s body was found the next day.

“This death could have been prevented if there were only a single person guarding the doors,” someone posted online on a child care blog.

Another lamented the lack of safeguards at the doors.

“At an American franchise family entertainment center called Chuck E. Cheese’s, all who enter receive stamps on their hands,” said another user online, “and these are checked upon their exit from the center. Plus, turnstiles are placed at the doors, where employees are always standing.”

The user added, “Korea’s kids’ cafes need to install a system like this as soon as possible.”

The situation was no different at another kids’ cafe in Sancheon-dong, central Seoul. On Monday afternoon, when a JoongAng Ilbo reporter visited, four kids aged 6 or 7 were running around the 33 square-meter (355 square-foot) cafe, while mothers sat in threes and fours sipping coffee and tea behind a folding screen. They barely had sight of their children.

The doors to the cafe were wide open with no employee standing watch at them.

“If I look away even for a moment, kids can run out the doors just like that,” said the 47-year-old owner of the cafe surnamed Kim. “But people go in and out the doors all day and I can’t just leave it locked.”

A kids’ cafe is an indoor small-scale amusement park that often features miniature train rides, carousels and game areas as well as places where parents can order food and drinks while they relax and chat.

The number of accidents at kids’ cafes reported to the Korea Consumer Agency quintupled between 2014 and last year, spiking from 45 cases to 230 cases.

The statistics speak contrary to some parents’ reasons for using the cafes.

“I take my son to a kids’ cafe once in a while to find a safe place for him to play freely,” said Lee Joo-heon, a father of a 5-year-old who frequents a kids’ cafe in his neighborhood in Yongin, Gyeonggi, “because more places than you think are designated as no-kids zones today.”

He added, “It’s the parents’ responsibility to take care of their kids, but given that parents pay for the service and space, I think kids’ cafes remain responsible for the safety of the children while they’re there.”

“We visit a kids’ cafe once it a while to get some rest,” said a mother of three in her 40s. “Kids can have fun and parents can get together to share information about hagwon [cram schools].”

She added, “In some cafes, the section where the kids play and where the parents sit and talk are completely divided. And when parents go, they pay for the hours of use and drop off their children, they expect the cafe to take care of their safety.”

Yet employees of some cafes receive scant training in how to take properly ensure children’s safety, while some cafes hire teenagers without properly training them.

A high school student working part-time at a kids’ cafe in Cheongju, North Chungcheong, was playing with a kid on an afternoon in June, when the kid jumped off a structure 1 meter (3.2 feet) off the ground and broke his arms.

A witness to another injury at a kids’ cafe recalled that much of employees seemed at a loss as to what to do when an accident takes place.

“I saw my friend’s daughter hit a structure at a cafe and end up with a broken tooth and torn gums,” said a 38-year-old surnamed Kim, “yet the employees just stood there staring.”

Experts are calling for more staff training at kids’ cafes.

“While it is important to have at hand enough employees to watch over the kids,” said Jung Eun-sun, deputy director of life safety team at the Korea Consumer Agency, “it is just as important to ensure that employees are trained properly regarding safety measures so that they can respond promptly when accidents occur.”

But a loophole in the system contributes to the problem.

Kids’ cafes are registered in Korea as restaurants or entertainment centers, and need only pass a sanitation test conducted by local government offices.

If a kids’ cafe has a trampoline or automatic facilities like a kiddie train, then it needs to pass a safety test by a local government office, but a systematic gray line exists for many of these cafes to operate without state approval.

“It is imperative for kids’ cafes to be registered as facilities in their own category, instead of as restaurants or entertainment centers,” said Moon Jin-young, a social welfare professor at Sogang University. “Otherwise, parents will keep expecting the cafes to take care of their children, while the cafes will expect the parents to do so.”

“Determining whether a kids’ cafe is an education facility or an entertainment facility,” said Chung Seon-ah, a child welfare professor at Sookmyung Women’s University, “will make clear to the parents and cafe staff whether the responsibility to take care of the kids lies with the parents or the employees.”