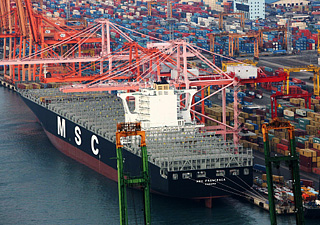 In a teary mea culpa, former Hanjin Shipping chairwoman Choi Eun-young admitted that she was partly responsible for the ruin of the shipper because of her poor management skills. “I was not qualified because I mostly had been a housewife,” she told a parliamentary hearing last week. Choi took over management of the company after her husband Cho Su-ho suddenly died in 2006. Under her, the shipper’s debt-to-equity ratio spiked from 405 percent to 1,460 percent.

In an article printed in Busan, the main port for the country’s largest cargo carrier, which filed for court receivership on Aug. 30, one employee said every member of the Busan office has kept working regardless of the proclamation of doom for their company. “We are sailors who were taught not to desert our ship till the end,” he said.

The last two weeks suggests that the only people trying to solve the crisis are Hanjin Shipping workers and the bankruptcy court of the Seoul Central District Court. The court embarked on the receivership process a day after a petition was filed although it usually takes 10 to 30 days. It cited the urgency of the matter. It immediately asked state-led creditors for debtor-in-possession financing of 170 billion won ($153 million) to help the shipper fight an immediate liquidity crisis and meet shipping delivery schedules.

Top policymakers including Deputy Prime Minister Yoo Il-ho and Financial Services Commission chief Yim Jong-yong were clueless about shipping. They sat back claiming the shipping crisis was a matter that the group’s owner should settle even as Korean shipments were stranded at sea and the reputation of Korea Inc. was sinking. Main creditor Korea Development Bank also maintained that it could not endorse more loans for the company because it didn’t know if they would be repaid after the shipper was deemed insolvent.

Hanjin Shipping’s assets are the worry of the creditors, but the cargo on its ships is a completely different matter. More than 40 Hanjin vessels carry over 15 trillion won worth of cargo. Fresh food is the biggest problem. It will have to be discarded if its shelf life is exceeded. Samsung Electronics’ productions overseas have been disrupted by a delay in arrival of key parts. Those assembly lines will have to come to a stop. Some 80 percent of the cargo is en route to foreign enterprises. The government’s stingy and shortsighted approach to the company and its problems could generate damages of billions of dollars. Samsung Electronics is pleading that it will pay for the freight cost to get its cargo on time. Korea could have to charter planes to deliver the cargo, but getting it to customers is not just an obligation of Hanjin Shipping but of a country whose economy relies on exports.

Maersk Group of the Netherlands runs the world’s largest shipping company. It has its own bank to back its logistics operations around the world. The second largest is Mediterranean Shipping Company (MSC) based in Switzerland, a country surrounded by mountains, not seas. It was founded by Neapolitan captain Gianlugi Aponte. Its ships are named after the offspring of the Aponte family. The business flourished as a result of Mediterranean openness coupled with the reasonableness of the Swiss.

Its survival strategy was unique. MSC increased its fleet by ordering vessels cheaply at Korean shipyards when the won was cheap following the Asian financial crisis in 1998. MSC was running the world’s second largest cargo fleet by the time the shipping industry picked up. In 2008, it carried out a sweeping restructuring. It sold off vessels and reduced the number of workers. For further cost-saving efforts, it joined with Maersk to launch the world’s largest global shipping alliance. The company has been making record profits.

An avid love of the sea and an eagerness to move beyond the mountainous frontiers by the Swiss has been underscored by the America’s Cup, a yachting event and the third biggest sporting event after the Olympics and World Cup. Americans have been taking the trophy home since they beat the English in the yachting match held every three years since 1851.

In 2003, the trophy went to a Swiss club. In the previous year, a Swiss biotech billionaire had recruited seafaring New Zealanders and other star sailors to form the most powerful team. The shipping industry is hugely volatile with the Baltic freight index, an indicator of the bulk cargo market, having lost 95 percent in just six months from its 2008 peak levels. Korea, the fifth largest shipping player, knows less about the sea than the Swiss although it is surrounded by the sea and relies on it to sustain its economy. The two largest local shippers — Hanjin and Hyundai Merchant Marine — are going under. The industry’s fate is at risk at the hands of clueless bureaucrats and financiers.