ICT exports fall for 11th month even before Note7’s recall

ICT exports fall for 11th month even before Note7’s recall 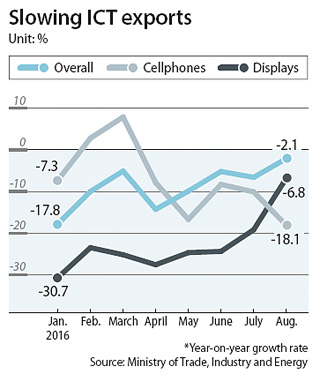 Exports of information and communications technology (ICT) products fell for the 11th consecutive month as cell phones and displays continued to be weak in foreign markets.

ICT exports declined 2.1 percent year on year in August to $14.13 billion, the Ministry of Trade, Industry and Energy said on Monday. The ministry said the decline was the lowest for this year. ICT exports have continued to slide every month after posting a year-on-year decline of 1.6 percent last October.

This 2.1 percent figure does not take to account the recalls of Samsung’s Galaxy Note7. That promising model was only released last month and the recall will be reflected in next month’s trade figures and beyond.

“Exports of cellphone products, including components and end products, dropped 18.1 percent last month due to an oversupply by Chinese manufacturers and low demand overseas as more customers waited for new smartphones to be released, including Apple’s,” said Kim Jong-joo, a director at the Trade Ministry.

In fact, exports of cell phones dropped 30.2 percent year on year last month. The government said most smartphones launched by local manufacturers focused on the domestic market rather than foreign markets.

Exports of computer-related products, including computers, monitors and auxiliary storage, rose for the third consecutive month. The figure jumped 22.7 percent year on year.

“Exports of computers themselves rose 10.6 percent as there was high demand ahead of new school semesters around the world,” said Kim from the Trade Ministry. Locally-manufactured computers and related goods were popular in China, the United States and the European Union.

However, the ministry released research data that indicates the computer market is likely to slow, which might take a toll on Korea’s ICT exports in general.

According to International Data Corporation, a market research firm, the global personal computer market size will grow just 0.02 percent year on year this year. The figure will remain below 1 percent in 2017 and 2018 and it will eventually fall 0.6 percent in 2019.

“Demand for displays and cell phones is falling in China, and oversupply by Chinese manufacturers and intensified competition with them are hurting local display and cellphone manufacturers,” said Kim.

Exports to the United States and EU countries dropped 5.2 percent and 5 percent each, while the figure for Japan rose 3.6 percent year on year. It was the first time in 14 months that ICT exports to Japan rose compared to the previous year, largely thanks to high demand for cellphone parts.

Meanwhile, Korea’s ICT imports were $7.53 billion, making a trade surplus of $6.59 billion as of last month. Korea imported fewer cell phones and displays from abroad, while imports of computers and related goods increased. The Trade Ministry noted that demand for cell phones in Korea dropped as many Koreans waited for Apple’s new iPhones to come out.

Korea’s ICT imports from China fell 15 percent to $2.57 billion last month, but the figure for Vietnam rose 40.6 percent to $500 million.