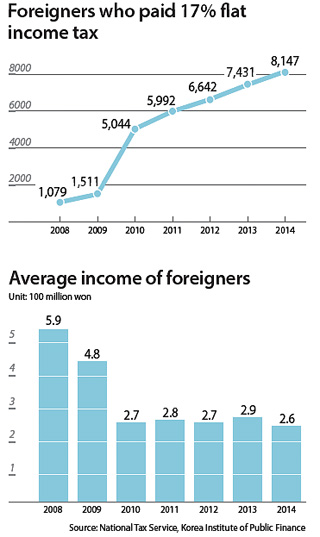 Foreigners, especially those in the upper income bracket, have benefited greatly from special tax treatment, the Korea Institute of Public Finance said in a report released Monday.

According to the institute’s report, a flat 17 percent rate on foreigners during their first five years living here has created a competitive environment against other Asian economies such as Hong Kong and Singapore, which have relatively lower income taxes.

However, the institute also noted that the current tax code provides too much support for high-income foreigners, especially those with annual earnings of more than 300 million won ($268,400).

In its study, the institute found no relation between lower income tax rates and attracting talented foreigners. The report said today’s Korean companies and products have become globally recognized and that brand power has played a more significant role in foreigners’ decisions to work in Korea.

The situation was different 15 years ago, when the current tax code was originally adopted following the financial crisis of the late 1990s.

In late July, the Korean government said it would raise the tax rate imposed on foreigners’ gross income from the current 17 percent to 19 percent as part of its tax code reform.

The new tax rate is scheduled to be implemented in 2020. The change came after people raised issue with foreigners benefiting from a flat 17 percent rate for their first five years living here, while Koreans have to pay taxes with a maximum limit that goes up to 38 percent.

Thanks to the special tax treatment, foreigners are estimated to have benefited from a tax reduction equivalent to 142.3 billion won.

“In hopes of continuing to encourage talented foreigners to come to Seoul, we have decided to extend the special tax treatment for three years but raise the rate to 19 percent afterwards,” a Finance Ministry official said.

The maximum tax rate of 38 percent levied on Korean workers has been said to be higher than that of other Asian economies including Hong Kong and Singapore, where the tax rate is between 15 percent and 20 percent.

Before the flat tax rate in Korea, there were several cases in which foreigners working in Seoul had their residential address registered in Hong Kong or Singapore.

Additionally, under the Korean tax code, foreigners with technology backgrounds receive a tax cut of 50 percent on their income. As a result, some market experts have raised issue with the excessive benefits afforded to foreigners.

The report by the public finance institute also advised the government to abolish tax returns on credit card spending, stressing that not only has the initial purpose been achieved but also that the benefits are mostly concentrated in the upper income bracket with annual salaries of 100 million won or more.

The tax return on credit card spending, first adopted in 1999, sought to encourage credit card use in order to enhance the transparency of self-employed entrepreneurs like restaurateurs and collect more taxes for the government.

The report said credit card and mobile payments are already actively used and that abolishing this tax return would not deter use of such payment forms.

The institute added that the government needs to improve the tax credit system so that benefits are not concentrated to only the upper income class.

Although top income earners with annual salary of 100 million won or more only account for 3.1 percent of the total labor force in Korea as of 2014, they pocketed 10 percent, or 188.7 billion, won from credit card spending.

The lower-income bracket between 15 million won and 20 million won only received 4.7 percent, or 88.8 billion won, despite accounting for 11 percent of the labor force.

The public finance institute said the government should gradually abolish this tax credit to spur spending by either downsizing the tax credit or redesigning it to more equally benefit all income brackets.