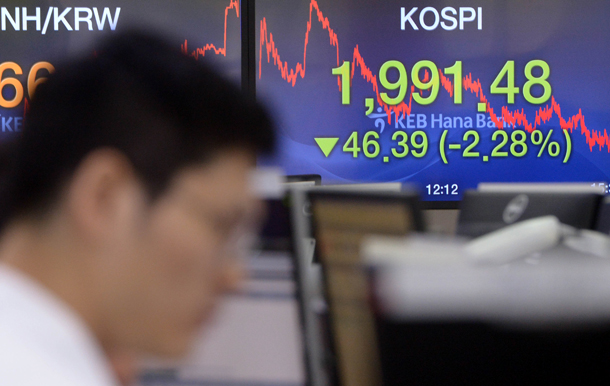 A display at KEB Hana Bank’s headquarters in central Seoul shows the benchmark Kospi falling 2.28 percent, or 46.39 points, to close at 1,991.48 on Monday. [NEWSIS]

Late last month, shares of Samsung Electronics soared with the release of the well-reviewed Galaxy Note7, with its jazzy iris recognition security feature. It broke year highs several days in a row and finally reached 1,687,000 won on Aug. 23, four days after the launch. On Monday, shares fell back to July levels.

The Kospi fell below 2,000 for the first time since Aug. 4 due to the unfavorable factors both domestically and overseas, including the Galaxy Note7 recall and a possible hike in U.S. interest rates, which weakened investor sentiment in general. North Korea’s recent nuclear test also hurt. 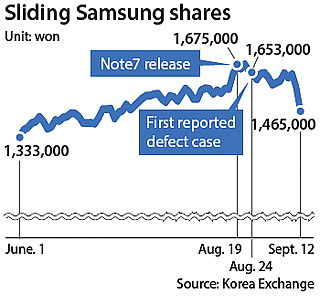 Market analysts had mixed views on whether those factors will have long term impact on the local stock market and Samsung Electronics.

“Monday’s stock market was mainly dragged down by Samsung Electronics and a possible U.S. interest hike, which might take place later this month,” said Park Sung-hyun, a strategist at Samsung Securities. “I do not think the downward pressure from these factors will necessarily last for long as Samsung is dealing with the issue very well. Furthermore, I believe the Federal Reserve’s decision to either increase or freeze the rate won’t have much impact on the local stock market.”

Park added that the Kospi might fall as low as 1,950 this month, and will rebound starting from the end of this month.

Noh Geun-chang, a researcher at HMC Investment Securities, said the cloud over Samsung might linger as many factors are remained unsolved.

“The company said it will give out new phones with new batteries but I am not sure how fast it will take to pass the certification process abroad,” said Noh.

“Like it or not, it will have a negative impact on the company’s third and fourth quarter data, and it will drag down the companies’ shares for quite a period of time.”