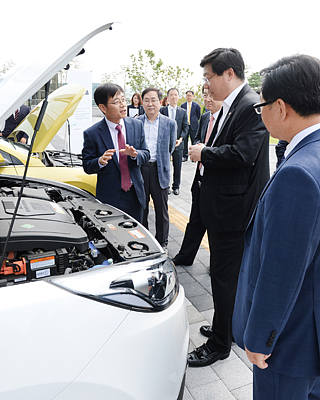 Joo Hyung-hwan, Minister of Trade, Industry and Energy, takes a look at a hydrogen-fueled taxi on Monday at a convention center in Sejong. [NEWSIS]

Taxis running on hydrogen fuel cell electricity will hit the road in Ulsan for the first time in Korea starting in November. A car-sharing service that only uses the eco-friendly vehicles will also launch the same month in Gwangju.

The automaker said Monday that it has signed a memorandum of understanding with provincial governments to supply fuel cell electricity vehicles (FCEV) for the two pilot projects.

“We hope people can experience the safety and eco-friendliness of fuel-cell electricity vehicles more closely through these projects,” said Hyundai Motor president, Chung Jin-haeng, at the convention center in Sejong on Monday where the MOU signing ceremony was held.

“We hope this could also give us the opportunity to more widely promote the technology of our eco-friendly cars.”

Hyundai Motor will start by supplying 10 units of their Tucson ix model in November, followed by five more units next year in Ulsan and Gwangju each. The Tucson ix is Hyundai Motor’s first massively produced FCEV, introduced in 2013. It was also the world’s first vehicle run by fuel-cell electricity that was manufactured by a global car company.

But the eco-friendly car did not gain much attention in Korea due to its expensive cost and lack of necessary infrastructure.

The provided vehicles in Ulsan will be managed by local taxi companies while Hyundai Motor will take care of the after-services.

Taxi fares for these eco-friendly vehicles has not been decided yet, but Hyundai Motor said it will not diverge too much from the current fare of ordinary cabs, which starts from 2,800 won ($2.51) in Ulsan.

Once the infrastructure is improved, Hyundai Motor said it is considering injecting 100 more FCEVs to be used for taxis in five selected regions.

Ulsan currently has one charging station in Maeam-dong, and two more stations are on the way by next year.

FCEVs, which use hydrogen gas to run their electric motors, take less than three minutes to fully charge an empty tank that can run up to 400 kilometers (249 miles) with a single charge. And unlike its hybrid rivals, it emits zero exhaust gas.

The car-sharing service, which will be managed by the local venture company J’Car that was incubated by Gwangju-based Creative Economy Innovation Center, will start with 15 FCEVs and 15 electric vehicles to be provided by Hyundai Motor starting in November.

Purchase of the eco-friendly vehicles will be supported by Hyundai Venture Investment and L&S Venture Capital, while Hyundai Motor will take care of the after services.

J’Car’s car-sharing service will be operated mainly around train stations, bus terminals and university neighborhood where there are abundant floating populations.