‘Age of Shadows’ is king of the Korean box office

‘Age of Shadows’ is king of the Korean box office 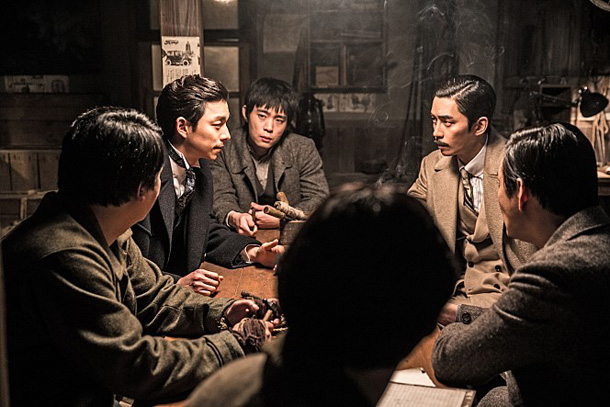 The historical film “The Age of Shadows” was number one at the domestic box office over the weekend, taking 69.1 percent of ticket sales. [WARNER BROTHERS KOREA]

The period film “The Age of Shadows” reigned at the domestic box office over the weekend. The Warner Brothers Korea release raked in 13.4 billion won ($12 million) from 1,444 screens between Friday and Sunday for a total of 17.7 billion won in its first week since it hit local theaters on Wednesday.

The film also premiered internationally at the 73rd Venice International Film Festival, which wrapped up on Saturday. It didn’t compete in Venice.

Opening on the same day, “The Map Against the World” came in second, selling 300,550 tickets since it release. The period film, which tells the story of Joseon Dynasty (1392-1910) cartographer Kim Jeong-ho (Cha Seung-won), earned 1.7 billion won over the weekend. Based on Park Bum-shin’s novel “Ko San Ja,” the movie features remarkable shots of Korean scenery, which the director Kang Woo-suk emphasized are not computer graphics.

Despite the controversy of being too similar to Hayao Miyazaki’s “Spirited Away” (2001), the newly-released Korean animation “Lost in the Moonlight” came in fourth, selling 63,355 tickets. Another animated film, “Metegol, Foosball,” hit the fifth spot with 59,311 tickets.

The disaster blockbuster “Tunnel” slipped to sixth spot, ending its record streak of dominating the box office for 28 consecutive days. Although the film hit local theaters in early August, it was still able to sell 46,305 tickets over the weekend, extending its total ticket sales to over seven million.

The Korean historical film “The Last Princess” made it into the tenth spot with 5.56 million tickets sold.