Nat’l prize for a life dedicated to a native flute

Nat’l prize for a life dedicated to a native flute 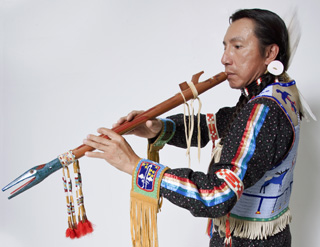 This undated photo provided by Michael Wolforth shows Dakota flute maker and player Bryan Akipa in Rapid City, South Dakota. Akipa is one of the recipients of the 2016 National Endowment for the Arts National Heritage Fellowship. [AP/NEWSIS]

SIOUX FALLS, South Dakota - There was a time when Bryan Akipa knew nothing of flutes. But that was long ago, before the budding artist stumbled across a wooden mallard-head flute in the studio of his mentor, sparking a fascination that led to a career in both making and playing the distinctive Dakota flutes.

Now Akipa, a member of the Sisseton Wahpeton Oyate Tribe, is a recipient of the United States’ highest honor in the folk and traditional arts, the National Heritage Fellowship, which is awarded by the National Endowment for the Arts. Akipa, who will be recognized later this month during a ceremony in Washington, told The Associated Press that he had to read up about the award when he got the call notifying him he had earned it.

“On Facebook, my daughter put it on her page, and I think she got the most likes. I put it on mine, but I got a few likes,” Akipa said. “Everyone congratulating me is really special, especially since it’s for the traditional flute.”

Akipa, 59, carved his first flute in 1975 from red cedar using a pocketknife, without knowing that it would lead to a career in music. After taking a break to serve in the Army and to finish college, Akipa became a teacher and began playing the flute for his students, as well as in different venues during the summer as a way to supplement his income. He produced his first CD in 1993, and he has since earned a Grammy nomination and won several Native American Music Awards.

Akipa stressed that every flute he sells is made entirely by hand. He said he sometimes even travels from his northeastern South Dakota community of Sisseton to northern Minnesota in search of wood.

“I’ve never mass-produced them,” said Akipa, who doesn’t track the number of flutes he has carved. “There are flute-makers that could make 2,000 flutes a year. They have laser technology (and) computers; they don’t even touch the wood.”

Russell Eagle Bear, a historic preservation officer for the Rosebud Sioux Tribe, said the flutes were traditionally used in courting and social gatherings. He said the art of flute-making was kept alive by only a few people for several years, but that it has had a comeback over the past three decades.

Akipa has taught flute-making classes in an effort to keep the tradition alive. He said he plans to use the $25,000 that comes with the fellowship to boost his career, which he had to pause to care for relatives. He wants to buy recording software and a new microphone to release more albums.

South Dakota’s U.S. Sen. John Thune said the artist’s talent and dedication to his work “gives South Dakotans, especially members of the Sisseton Wahpeton Oyate, a lot for which we can be proud.” AP