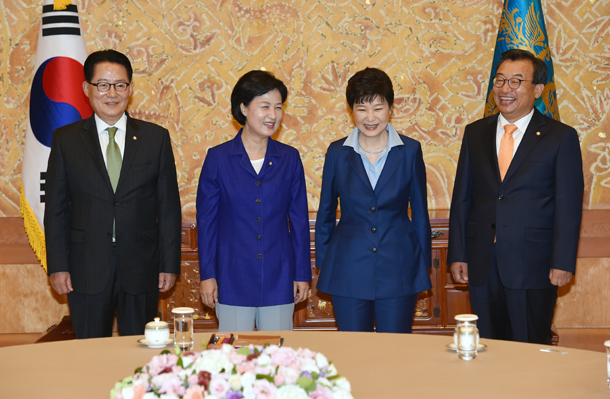 President Park Geun-hye meets the heads of the ruling and opposition parties at the Blue House on Monday. From left, Rep. Park Jie-won, acting head of the People’s Party, Rep. Choo Mi-ae, chairwoman of the Minjoo Party of Korea, President Park and Rep. Lee Jung-hyun, chairman of the Saenuri Party. [JOINT PRESS CORPS]

President Park Geun-hye’s meeting with the heads of the ruling and opposition parties ended Monday without agreement - and a show of disunity on how to react to North Korea’s nuclear tests and her decision to allow deployment of a controversial U.S. antimissile system.

At the request of Choo Mi-ae, newly elected chairwoman of the main opposition Minjoo Party of Korea, Park invited leaders of the three largest parties to the Blue House for a discussion to address urgent issues, particularly the North’s fifth nuclear test. In addition to Choo, Saenuri Chairman Lee Jung-hyun and acting head of the People’s Party, Park Jie-won, attended.

Despite the Blue House’s hope to get the cooperation of the opposition on urgent and sensitive security issues, the 115-minute meeting was a notable failure.

The Minjoo Party summarized it as “Park’s one-way lecture on national security.”

Park said she will deter the North’s ambition to become a nuclear-armed state at all costs. “North Korea wants to become a nuclear state by any means,” Park was quoted as saying by a presidential aide. “This is a showdown of wills: The international community’s will to force the North to give up its nuclear program and the North’s will to continue the nuclear program are clashing. And we must win.”

She condemned Choo’s comment that she must not use a security crisis for domestic politics. “Do you think I am using it?” she said. “The United States and Japan are sanctioning and condemning the North, and are you saying they are also using the crisis? You must not say that I am exploiting this serious situation.”

Park asked the two opposition parties to state their positions on her decision to allow the U.S. deployment of the Terminal High Altitude Area Defense (Thaad) system in South Korea to deter the North’s nuclear and missile threats. People’s Party’s acting leader Park said the party opposes it, while Choo said the Minjoo Party has yet to decide its stance.

Park said the North has chosen the path of becoming a nuclear state, and the South has two options. “One is accepting it, and the other is forcing the North to change its strategy by cooperating with the international community to make it feel that it won’t survive if it persists with the nuclear program.”

Calling the Thaad deployment a basic, sovereign decision about self-defense, Park also brushed off China’s opposition. “We have the right to have it, no matter who opposes it,” she said, while stressing she will further communicate with Beijing on the matter.

She shot down the opposition parties’ demand that the deployment should be approved by the National Assembly.

A People’s Party’s proposal to create a national security consultative body among the parties and the government was also rejected by Park.

Following the meeting, the Minjoo Party did not hide its displeasure. “We felt once again that we were talking to a wall,” said Rep. Youn Kwan-suk, spokesman of the party, who accompanied Choo.

Choo also complained that Park pressed her on the Thaad issue, and she responded that it is not a military issue but a diplomatic issue. “I told her that this is a diplomatic issue between the United States and China over a geopolitically sensitive location,” Choo said. “I told her clearly that we must not take an initiative.”

Choo said she rejected the Blue House’s proposal to issue an agreement, because the opposition parties did not want a forced accord. She said Park and her economic officials completely lacked understanding of economic issues, such as Korea’s snowballing household debt and the collapse of the country’s shipping and shipbuilding industries.

“The president said what she had to say, and the two opposition leaders said what our beliefs are,” Park, acting head of the People’s Party, said. “Everyone condemned the North’s fifth nuclear test, but disagreed on what to do about it. The president wants to punish the North with the international community, while we, the two opposition leaders, said sanctions and dialogue must be implemented simultaneously. Park also defended the Thaad deployment, and we disagreed.”

It was the first meeting between Park and the heads of the three largest parties since the 20th National Assembly was launched in May.

At the meeting, Park also defended the government’s deal with Japan to conclude a decades-long dispute over Japan’s wartime sexual slavery of Korean women. She rejected suspicions that the government had a secret agreement with Tokyo to remove a statue symbolizing the so-called comfort women in front of the Japanese embassy in Seoul. “I assure you there was no secret agreement,” Park said.

Japanese Prime Minister Shinzo Abe asked for the statue to be removed during a bilateral summit with Park in Laos last week on the sidelines of a regional conference, Japanese media reported. The reports fueled speculation that Seoul agreed secretly about the issue when the two foreign ministers struck a “final and irreversible” settlement in December. Japan issued an apology and established a 1 billion yen ($9.8 million) fund for the victims from Japan’s state budget.

Park also dismissed the opposition leaders’ demand to immediately fire Woo Byung-woo, a scandal-ridden senior civil affairs secretary. She asked them to wait and see the outcome of the prosecution’s special probe of the allegations.