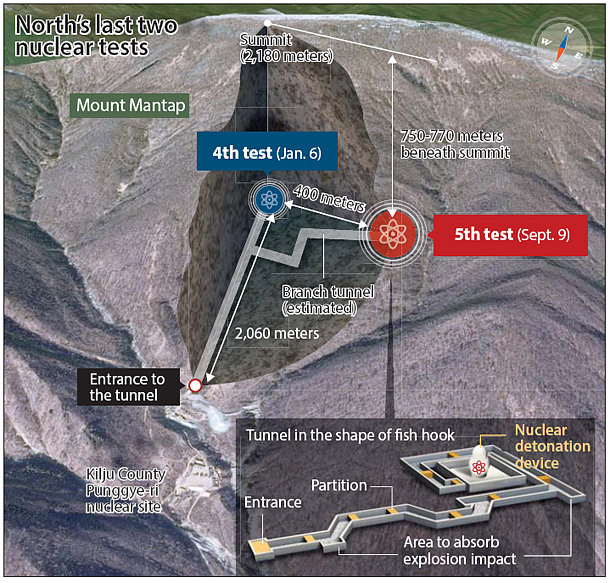 The South Korean military said Monday that North Korea could carry out its sixth nuclear test at any time.

“North Korea conducted its first nuclear test in the No. 1 underground tunnel” at its Punggye-ri nuclear site in North Hamgyong Province, said Defense Ministry spokesman Moon Sang-gyun during a regular briefing. “The next four tests were in the No.2 tunnel. The next test could happen in the No. 2 tunnel, as it is assessed to have been prepared, or at the No. 3 tunnel.”

Speculation is on the rise that the North could perform a test on Oct. 10, the founding day of its Workers’ Party. That would be only 32 days after its fifth test and the shortest time gap between tests.

North Korea’s first four nuclear tests were three years apart from each other: the first in 2006, the second in 2009, the third in 2013 and the fourth last January. It broke the cycle with Friday’s test, which came 248 days after the January explosion.

“The fact that the North carried out its fifth test so close to the fourth test has proven our assessment that it has bored many branch tunnels into Mt. Mantap,” a military official told the JoongAng Ilbo on Sunday.

A Friday announcement from the North celebrating the fifth test also suggested the possibility of an additional test. In a statement issued by the North’s Nuclear Weapons Institute, the North said it will “take further measures to bolster the state nuclear force.”

The intelligence community in South Korea believes that the No. 3 tunnel at Mt. Mantap has never been used, and might be used for the sixth test.

That assessment was backed by Defense Minister Han Min-koo Friday during an emergency briefing to members of the parliamentary defense committee. “We assess that the North is prepared to perform another test at an additional tunnel,” the defense chief said.

The first test, conducted on Oct. 9, 2006, took place in the No. 1 tunnel southeast of the tunnel where the fifth test took place. The second, third, fourth and fifth tests were conducted in branch tunnels connected to the No. 2 tunnel.