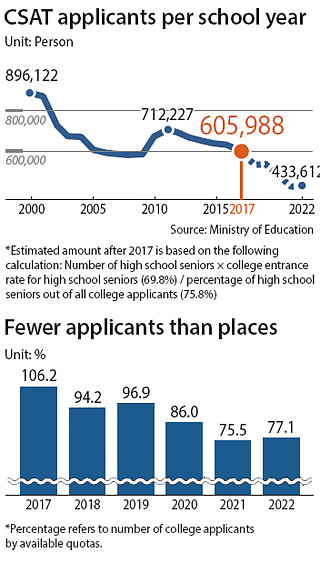 The number of people who applied for this year’s College Scholastic Ability Test (CSAT), the chief barometer for college admissions in Korea, shrunk for the sixth time in a row, evidently reflecting the country’s declining population growth rate.

A total of 605,988 people have applied for the upcoming CSAT, down 25,199 people, or 4 percent, from last year, according to the Korea Institute for Curriculum and Evaluation, which operates the annual exam. This year’s test will be held on Nov. 17.

In the 23-year history of the CSAT, the latest number of applications is one of the lowest to date, and it marks a continuous decline since 2010, when 712,227 people signed up. Of the 605,988 people who will take the test in two months, 75.8 percent are high school seniors and 22.3 percent are graduates. The remaining 1.9 percent passed Korea’s general equivalency diploma (GED). In Korea, many students who fail to gain admission to their dream college retake the CSAT, which is why high school graduates often fill up a large portion of the test-taking body. According to estimates from the Ministry of Education, the number of CSAT applicants will drop even more in the coming years. In 2017, approximately 529,973 people will take the test. In 2020, about 483,679 people will do so. Even worse, the sheer number of CSAT applicants is estimated to be smaller than the total number of students needed for quotas in local universities starting next year, which means that the lowest-ranked schools won’t be able to meet their student enrollment quotas.

For years, the Education Ministry has been trying to solve this problem by annually identifying the most underperforming universities and cutting off their government subsidies. The crackdown has been aimed at restructuring and reducing the country’s postsecondary education system.