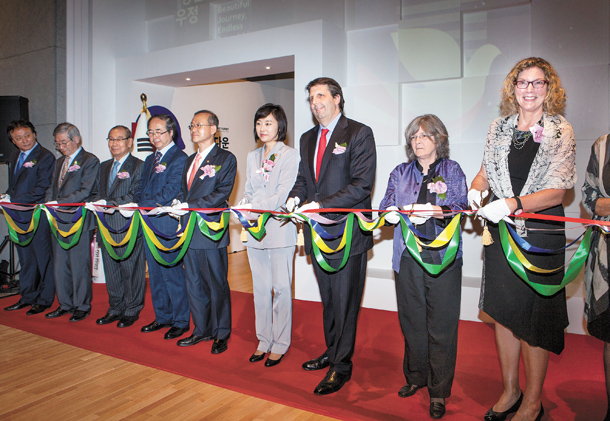 Some 80 former U.S. Peace Corps volunteers to Korea gathered at the National Museum of Korean Contemporary History in Seoul on Monday to celebrate the semi-centennial anniversary of the Peace Corps’ first year of service in Korea.

“I congratulate the National Museum of Korean Contemporary History on its publication of inspiring stories from Peace Corps volunteers who served in the Republic of Korea from 1966 to 1981,” said U.S. Ambassador to Seoul Mark Lippert. “The United states stood shoulder to shoulder with the Korean people as they made this journey from poverty and struggle to prosperity and strength.”

The exhibit “Beautiful Journey, Endless Friendship,” which celebrates the U.S.-Korea Peace Corps program from 1966 to 1981, runs until Nov. 20 at the National Museum of Korean Contemporary History.

In those 15 years, some 1,700 Peace Corps volunteers came to Korea, initially as English teachers but later more as public health workers vaccinating people against tuberculosis and other epidemics commonly found in Korea at that time.

The exhibit allows visitors to view some 1,200 artifacts donated by the volunteers, including black-and-white photographs of volunteers teaching in classrooms crammed with 60 to 70 students, letters exchanged between volunteers and their students, notebooks inscribed with Korean words and their translations (including one translation of a Korean phrase for “This is driving me crazy!,” perhaps an indication of the stress that volunteers had to occasionally deal with while living in a foreign country) and even an LP record produced by a group of Peace Corps volunteers, with lyrics in Korean, about how to battle tuberculosis.

“Korea is something like a second home to me,” said Peter Lomhoff, who served as a Peace Corps volunteer in Korea from 1966 to 1968, among the first 100 volunteers to the country. “A few years ago I came back and met my student, whom I taught at Pyongsan Middle and High School, and found out that he is now the principal of a high school in Yongsan.”

“My first Chuseok in Korea in 1975 was the beginning of my beautiful journey in Korea and falling in love with the countryside,” said former U.S. Ambassador to Seoul Kathleen Stephens, who was also a Peace Corps volunteer to Korea from 1975 to 1977. “We all know that we received far more than we could ever give.”

Stephens was stationed as an English teacher at a boys’ middle school in Yesan County, South Chungcheong. She took the U.S. foreign service exam in Korea during her volunteer years, returned to Korea in 1983 as a diplomat, and served as the U.S. ambassador to Seoul from 2008 to 2011.

The opening ceremony on Monday also brought together old friends from decades ago.

“Former Ambassador Stephens was my English teacher at my middle school in 1976,” said Lee Chul-won, a colonel in the Korean Army. “Whenever I saw her in the hallways or even if she’d just say hello to me while passing by, my heart would pound loudly.”

He added, “I mean, I was just a 14-year-old at the time. Former Ambassador Stephens invited me to this event. I am happy to see her again.”