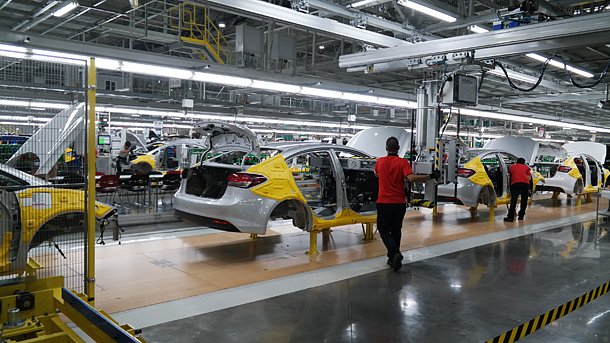 The recently completed Kia Motors plant in Pesquería, Mexico, brings up three concerns that people have about the Korean economy.

The first is global trade protectionism. The most intense trade protectionism since the Great Depression in the 1930s is spreading around the world. In the U.S. presidential campaign, free trade agreements, or FTAs, have been criticized as the main culprit taking away jobs from Americans. The ideals of free trade, of bringing down tariff barriers to promote trade, are fading away. The countries raising trade walls have a clear message: if a foreign company wants to access the market, it should build a local factory.

Mexico has emerged as the manufacturing base for global carmakers such as General Motors and Renault-Nissan. Operating a plant in Mexico means breaking through the trade barrier between the United States and Latin America, as Mexico is the FTA hub in the region. Without a plant in Mexico, Kia Motors struggled to expand in Latin America, as have many companies facing the painful reality of needing to build overseas plants to survive and expand.

The second concern is labor productivity. The average daily wage of Mexican workers in the auto industry is $40, lower than that of China. It is about 30 percent that of entry-level workers in Korea. Mexico is rising as a “post-China” destination thanks to the affordable wage levels there.

Newly-built manufacturing lines in Mexico are also more flexible. They are designed so that factory workers can easily adapt when manufactured models are modified to accommodate the changing tastes of consumers. Therefore, overseas factories are more productive than domestic plants, where facilities are old and workers are reluctant to switch lines.

The third concern is the competitiveness gained from government assistance. Countries are eager to bring in foreign companies, and those companies decide which country to settle in based on the substantial benefits gained. Mexico provided a 1,226-acre factory site for the Kia Motors plant and built an exclusive electric grid and railway for free. On top of that, corporate tax exemption and income tax benefits for factory workers were offered.

Of course, Mexico also benefits from Kia’s presence. Kia Motors and partner companies create 15,000 quality jobs. The workers are employed in permanent positions and enter the middle class, and they will bring vitality to the local economy with the newly-gained spending power. Can the Korean government offer similar benefits to keep Korean companies from moving abroad?

The Korean economy has long been described as a “small-scale open economy.” Companies faithfully operated factories in Korea and overcame the limits of a small domestic market by expanding to overseas markets. In the meantime, jobs were created, and the middle class grew.

However, the domestic manufacturing sector cannot increase employment any more. Labor productivity has hit its limit. Overseas, visible and invisible trade walls such as high tariffs are pushing away products produced in Korea.

No one can stop companies from moving factories abroad for survival. Regrettably, the Korean economy’s job creation mechanism is crumbling. We desperately need reorganization and innovation of the economic system.