After Korea’s strongest earthquake, gov’t calms fears of a Big One

After Korea’s strongest earthquake, gov’t calms fears of a Big One 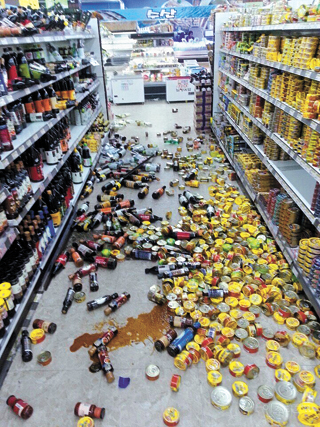 Cans and bottles lie scattered on the floor of a supermarket in Gyeongju, North Gyeongsang, after two large earthquakes Monday evening. [TWITTER]

The fact that Korea was shaken by two earthquakes in less than an hour Monday — including its strongest ever in recent history — doesn’t mean a Big One is coming, said the chief of Korea’s national meteorological service.

But Ko Yun-hwa, administrator of Korea Meteorological Administration (KMA), admitted there was “always a chance” that stronger ones could strike the nation in the future.

His statement was made Tuesday morning during an emergency meeting with lawmakers at the National Assembly.

According to the KMA, the 5.8-magnitude quake was the largest in the history of Korean earthquakes since 1978, when the government started monitoring seismic activity. There were no serious casualties or damage.

The first, a 5.1-magnitude earthquake, struck at 7:44 p.m. and was felt in the surrounding areas of Daegu, Ulsan, Busan and Daejeon. The second earthquake at 8:32 p.m. sent tremors even farther to Seoul.

As of press time Tuesday, at least 250 aftershocks were felt in Gyeongju and nearby areas.

“There’s always a chance that an earthquake with a magnitude from 5.8 to the early 6.0s can strike Korea,” Ko said Tuesday. An earthquake higher than 6.5 is highly unlikely, he stressed.

“It’s hard to predict when the aftershocks will entirely stop, but [the agency] is observing the situation closely because we think they might last a couple of more days.”

Ko has yet to mention a precise cause of the latest earthquakes, saying that experts are expressing different thoughts.

Eight injuries linked with the earthquakes were reported to the Ministry of Public Safety and Security so far, mostly involving people falling to the ground while trying to flee their homes.

Among the eight cases, five were in North Gyeongsang, two in Daegu and one in South Jeolla. None are life-threatening, government officials said.
In terms of property damage, at least 253 cases have been reported so far, including 106 buildings developing cracks, 16 burst water pipes, 66 damaged roofs, five rockslides and 60 broken signboards.

Korea Hydro & Nuclear Corporation, operator of the country’s nuclear plants, said none of its reactors have been affected, but the Wolseong reactors No. 1 through 4, which are nearest to the epicenter, would be temporarily shut down. It was the first time in Korea that a nuclear power plant has been suspended due to an earthquake.

The mobile messenger app KakaoTalk, used by over 90 percent of smartphone owners in the country, immediately went out of service for about two hours following the first earthquake. Kakao, the operator, said in a statement that the earthquake interrupted connections to some of its servers.

Several KTX bullet trains were halted on the railway linking Ulsan and Gyeongju or forced to slow down for a while, but quickly regained full speed shortly afterward. Korail, the operator, said all travel during the Chuseok holidays would run as planned. Engineers will thoroughly examine railway infrastructure after midnight when no trains are mobilized.

Culture authorities in Gyeongju, capital of the late Silla Dynasty (57 B.C. to A.D. 935), said Tuesday no serious damage was detected on any historical artifacts, except for a few cracks at Bulguksa Temple and the Oreung Royal Tombs.

A spokesman for the Cultural Heritage Administration said several cracks were found on the main temple’s rooftop in the Bulguksa area as well as on a wall surrounding the royal tombs. None, he said, threatened their historical value.

The Gyeongju National Museum, which holds numerous treasures of the Silla kingdom, announced a special holiday for Tuesday in order to closely examine pieces for damage.

It remains unclear what triggered the earthquakes, but one key theory is a collision of tectonic plates surrounding Korea.

In response to worries that the earthquake was linked with North Korea’s fifth nuclear test last Friday, which set off a 5.04-magnitude artificial tremor, Yoon Sung-hyo, a researcher at Pusan National University’s Research Institute for Science Education, said the chances were near zero.

Presiding over a cabinet meeting Tuesday, President Park Geun-hye urged the government to quickly dispatch an assessment team to inspect possible damage, find what caused the earthquakes and prepare for stronger quakes in the future.

According to statistics from the Ministry of Public Safety and Security, 105,448 buildings across the country last year were found to be not earthquake-resistant, and not even half (42.4 percent) followed guidelines to retrofit themselves.

A separate report commissioned by the ministry and conducted by the University of Seoul, which hypothesized a 7.0-magnitude earthquake striking central Seoul, concluded that around 27,600 people would die and property losses would amount to about 2.8 quadrillion won ($2.52 trillion).