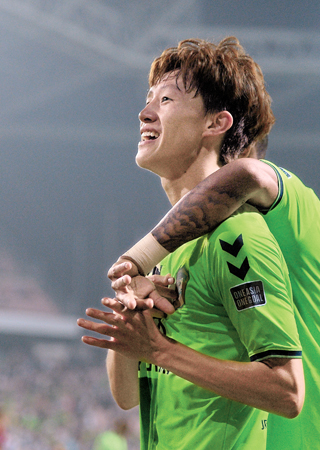 The start of the final round of the Asian qualifiers for the 2018 Russia World Cup was less than impressive for Korea. While Korea shut down China 3-2 in a neck-to-neck bout at home, the match with Syria, against whom Koreans were expected to come out with a landslide victory, ended with a disappointing 0-0 score.

It all happened without a center forward to speak of. Uli Stielike had Ji Dong-won and Hwang Hee-chan up front, but the two, who mostly play as second strikers at their European clubs, could not step forward to fill the role. Without proper candidates to fill the void from Europe or elsewhere around the world, strikers from the K-League Classic are rising to the surface as the clear candidates.

“I represent K-Leaguers and I have to play better football to open doors for others in the K-League,” Lee Jae-sung, midfielder from Jeonbuk Hyundai Motors, who also wears Korea’s national team kit, said. “Regardless of which league you play in, the K-League or European leagues, we all want to represent our country. What matters is not which league you play in but how prepared you are to play at the international level.”

Indeed, while there are only a handfull of Koreans who play as the target man for their clubs outside of Korea, there are plenty of talents ready to assume the responsibility.

For a start, Jung Jo-gook of K-League’s Gwangju FC is a clear option. Jung, although seasoned at the age of 32, is enjoying the second wind of his career this year as the top scorer of the domestic league. He has netted 16 goals for his club this season, topping his previous personal best of 13 goals.

The last goal for the veteran came on Aug. 27 against Ulsan Hyundai FC. Jung stepped into the pitch in the middle of the second half and all he needed to add points to his belt was less than half an hour, scoring an equalizer during the injury time. Jung also has more than enough experience to offer for Stielike. He’s played for the Korean national team in every age level, U-17, U-20, U-23 and finally the senior team.

Yang Dong-hyen adds more depth to the options that Stielike may consider from the domestic league. On Sept. 10 against Suwon FC, Yang piled in two goals by himself, tallying 12 total for the season. The 30-year-old lone striker is also enjoying a second heyday, topping his previous record at 11 goals.

After Jung, he is the only other Korean striker ranked within the top five in K-League’s standings for goals.

What makes Yang exceptional is the quality of his goals. Out of the 12, only one came off a spot kick. Netting 11 goals from the field, he also has the physique to take up the position of the target man at the international level. After all, a striker standing at 1.88 meters (6 feet 2 inches) with good ball handling skills and heading ability is no easy find.

The next match in Stielike’s campaign for the 2018 World Cup is slated for Oct. 6 against Qatar. Playing on its home turf, Korea is in desperate need for the three points that come with a win to keep its competitive edge within Group A.

Perhaps this time around, there will be more K-Leaguers on the pitch alongside Lee.