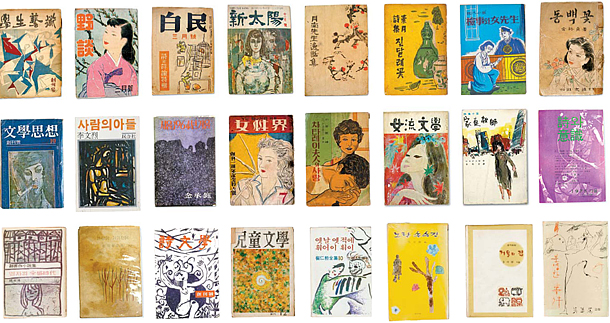 A new exhibition at Museum San in Wonju, Gangwon shows works by award-winning Korean illustrators as well as book covers by some of the most influential Korean artists like Kim Whanki (1913-64), Lee Jung-seob (1916-56) and Chun Kyungja (1924-2015). [MUSEUM SAN]

And when you add the panoramic mountains and crisp air of Korea’s Gangwon Province, immersing yourself in the art of storytelling may become an even more charming way to spend the season.

A new exhibition at Museum San in Wonju, Gangwon, is a show that brings literature and other forms of art together. The museum, located inside the Hansol Oak Valley resort, is known for its picturesque setting.

The exhibition, titled “Painting with a Story, Illustration,” displays award-winning illustrations - some of which are original copies. In addition, visitors can also enjoy book covers drawn by some of Korea’s most beloved artists, which are also part of the museum’s collection.

“Illustration is one of the most direct and communicative art genres,” Choi Yong-june, the museum’s chief curator, said. “We think the exhibition will help people redefine their existing perception of illustration.”

Officials of the museum also note that until now, illustration-themed exhibitions in Korea mostly took place in children’s museums or relatively small museums, and very rarely at renowned museums that specialize in art.

Goh’s “Magic Bottles” (2005) revolves around the idea of bottles from a grocery containing unexpected things, whereas Choi’s “The Stone Temple of Seokguram” (2009), drawn with ink and charcoal on hanji (Korean mulberry paper), is about the children of Korea’s Silla Dynasty (57 B.C. to A.D. 935), taking a journey to the Seokguram Grotto with their individual wishes.

“It’s notable how the exhibition brought drawings from book covers into the museum,” the organizers said through a press release. “We hope visitors take an interest in the ‘published art’ that they may have otherwise overlooked.”