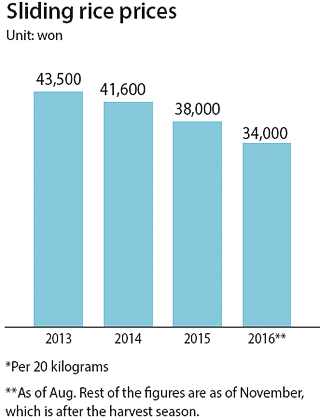 The government will buy 390,000 tons of rice to stabilize a market that has seen slides in both consumption and price.

According to Ministry of Agriculture, Food and Rural Affairs on Sunday, the rice output continued to increase compared to the previous year even though the total amount of land used to grow rice in Korea dropped 2.5 percent year on year to 779,000 hectares this year.

Korea’s oversupply of rice has been rising since July 2013, when the rice price peaked at 170,000 won per 80 kilograms. The price has been falling since. The 390,000 tons the government will buy is the same amount as last year.

Korea harvested a record 4.32 million tons of rice last year and this year is expected to be about the same amount and possibly more.

“The government will buy rice produced in Korea starting from Friday until the end of the year,” said Lee Sang-man, a director at the Agriculture Ministry. “The government will pay 45,000 won per 40 kilograms of first class rice. The government also is running a task force to monitor the rice market and stabilize it and will come up with specific plans next month, which is when the estimated figure for this year’s output will come out.”

The government is paying about 93 percent of the 48,280 won market price for 40 kilograms. The government said it will change the price in November if prices in the domestic market change after the harvest.

Some 30,000 tons will go into the ASEAN Plus Three Emergency Rice Reserve. 10 ASEAN countries, along with Korea, Japan and China, maintain a certain level of reserves to share in emergency situations.

Korea’s rice reserves rose 26 percent from 1.39 million tons last year to 1.75 million tons as of July. They are expected to surpass the 2 million level this year, which is 300 percent more than the 800,000 tons recommended by the Food and Agriculture Organization of the United Nations.