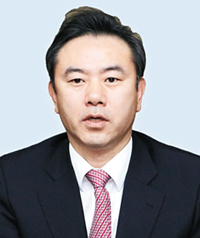 Yoo Jae-hoon, president of the state-run Korea Securities Depositary, was named a controller at the China-led Asian Infrastructure Investment Bank (AIIB), according to the Ministry of Strategy and Finance Tuesday.

The position is one rank below vice president.

Korea lost its most important executive position at the AIIB after Hong Ky-tack, former chairman of Korea Development Bank (KDB), stepped down from the vice president seat in June due to an accounting scandal.

Korea has also been given seats on advisory panels.

Hyun Oh-seok, former Korean Finance Minister, will be a member of the bank’s International Advisory Panel for two years. There are ten experts from member and non-member states on the panel. They advise the bank on strategies.

Lee Dong-ik, former CIO of the Korea Investment Corporation, will serve as Operations Advisor for Private Sector Development. His job is to manage cooperation with the private sector in acquiring investment.

“The government will host a job fair in November on getting jobs at international financial institutions around the world to have more Koreans participate in not only the AIIB but also other international banks,” said an official at the Finance Ministry.

Hong took leave for six months and disappeared before he officially stepped down as vice president of the AIIB after he was embroiled in a scandal over cooked books at Daewoo Shipbuilding & Marine Engineering. The KDB has managed the company for 16 years.

He revealed to the media that the KDB’s acceptance of fake profit and loss statements by DSME was approved by ministers at confidential meetings in the West Wing of the Blue House earlier this year. He served as KDB Chairman from April 2013 to Feb. 2016.

After Hong stepped down in June, Deputy Prime Minister and Minister of Strategy and Finance Yoo Il-ho said, “The Korean government will do its best to have a Korean person be appointed for the vacant position.” A government official has said a Frenchman will probably be appointed.