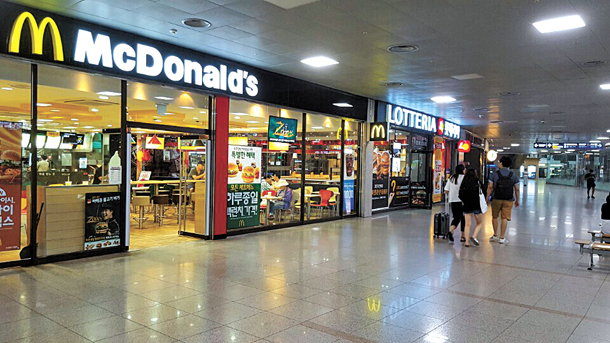 In March 1988, Korea’s first McDonald’s store opened on Rodeo Street in Apgujeong, southern Seoul. For over 20 years since then, it has been the leader of an American fast-food trend in Korea that began with Burger King and KFC in 1984. The four top chains - McDonald’s, Burger King, KFC and Pizza Hut - now have approximately 1,100 branches operating nationwide.

But after 20 years of success, three of these companies are rumored to be facing acquisition. McDonald’s Korea is negotiating for sale with a joint consortium of CJ group, KG and NHN Entertainment. The agreement has yet to be finalized as McDonald’s headquarters wishes to maintain influence on ingredient purchasing, franchise and brand management after disposal. KFC is still looking for a buyer and Pizza Hut was rumored to be undergoing acquisition, too, although the company later denied this.

All three companies have, in recent years, faced precipitous net losses. In 2012, Pizza Hut set an annual net profit of 2.7 billion won ($2.4 million). The following year, it made 1.6 billion. The year after that, it saw a loss of 300 million. Similarly, between 2013 and 2015, KFC saw an increase in sales of 20 billion won but a decrease in net profit from 10.6 billion won to one billion won. And in 2014, McDonald’s net profit was 30.9 million won, whereas last year, the fast-food leader’s sales reached their highest level ever and yet the company saw a term net loss of 13.1 billion won.

The fundamental reason behind this trend is that most American fast-food franchises entered Korea between the 1980s and 2000s, when eating out began to be seen less as basic need and more as a cultural and social experience. This shift was driven by students who had studied abroad, mainly in the United States. Many of these students lived in the Gangnam district upon their return, which is why a number of foreign food chains that were once popular - such as New York Fries and Steff Hotdog - began by setting up stores in Gangnam’s Samseong-dong or Sinsa-dong.

Another important factor was a reverence for American culture in the Korean imagination. Being able to afford American food was considered a status symbol. As the cartoonist and Duksung Women’s University professor, Lee Won-bok, known for his series “Far-away nations,” once said, “One bite of a hamburger was enough to make us feel ‘American.’”

The situation reversed, however, as the Korean economy grew and spending patterns diversified. Being “American” was no longer perceived as a guarantor of success. Furthermore, during the 2000s the perception began to spread that rather than being a sign of prestige, fast-food is junk food. During this period, fast-food was cited repeatedly as the reason for adult diseases such as obesity and high blood pressure.

Experts say that despite the changing atmosphere, American franchises were slow to adjust to the health-conscious trend. This was the case for McDonald’s Korea, which met continual barriers in menu development and advertising since McDonald’s headquarters prioritizes its identity as a global brand, therefore required unity in its marketing strategy and products.

Domestic fast-food brands, on the other hand, focused on developing items that would cater to Korean tastes, such as Lotteria’s kimchi and rice burgers. Burger King, which was acquired by a private equity firm in Hong Kong, was the only one among the four to adapt. Last year, it presented a new menu using jalapeno peppers in order to attract Korean consumers, who enjoy spicy food. Burger King’s annual profit rose from 6.5 billion won in 2013 to 10.1 billion won in 2014.

Recently, the domestic food group SPC brought in Shake Shack, the American homemade-burger brand. Although its first branch near Gangnam Station is enjoying great success at the moment, it is hard to say what the future will hold for Shake Shack since other similar brands, such as Korea’s Kraze Burger and America’s Burger B, have been struggling over the last ten years, suggesting that the homemade-burger trend is already long gone and it might be difficult for any one brand to reignite it.

The same pattern is apparent in Japan and China. Launched in 1971, McDonald’s was the fast-food leader in Japan for over 20 years. The current runner-up is Japan’s Mos Burger, which serves burgers inspired by Japanese dishes such as okonomiyaki (traditional Japanese pancakes), vegetable fries and grilled wagyu beef. McDonald’s is up for acquisition in both Japan and China, but the process is proving to be a challenging one due to its low growth potential.

“Domestic brands like Lotteria can always make decisions to shift their identity to a premium brand whereas American franchise headquarters are still insisting on maintaining its existing brand identity,” said a spokesman working in the distribution industry. “Being a global brand can be a weakness in an era where market conditions change in such a short time.”

Nevertheless, American franchises still requiring large initial investments. This initial cost includes loyalty fees, training and a security deposit. According to the Fair Trade Association, an owner of a McDonald’s pays an average of 750 million won whereas its domestic competitor Lotteria requires about half that amount. The average initial cost for opening a KFC branch is 2.6 billion won, which is 25 times more expensive than what is required for Kyochon, a Korean chicken brand.

A similar failure was already seen among American family restaurants that once headed the food service industry in the 2000s. First launched in the mid-1990s, they attracted Korean consumers by presenting dishes such as steak and pasta, which were then rarely found in other restaurants. But most of these left the country in the 2010s, as they failed to adapt to the changing appetites of Korean consumers. Tony Roma’s, Marche, Sizzler and Bennigan’s all left during this time.

Their average survival period for such businesses in Korea was 18 years.

“The most popular dishes of the franchises that recently left Korea remained unchanged for over a decade,” said a spokesperson working for the distribution industry. “So clearly, they weren’t working hard enough to develop new menus.”

“American food companies failed to establish loyal customers,” said Choi Jeong-ho, professor of marketing and management for St. John Fisher College, “as they were slow to match the needs of Korean consumers, who are particularly given to following the latest fads.”

But making the transition is not impossible. For a model example of an American food company that gained success to the Korean market by balancing its original identity and localization, Choi cited Starbucks.

“Starbucks is a good model for global food companies,” Choi said. “Its customized tactics, such as developing beverages for local tastes and operating regional coffee bean farms, have made the company’s efforts at localization a success.”