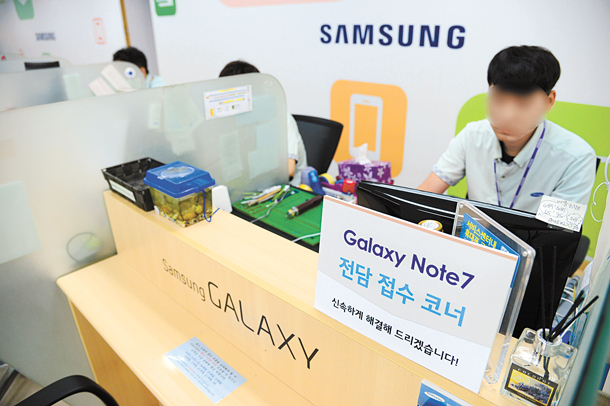 A staff member at a Samsung Electronics service center in Jongno, central Seoul, works Sunday, a day before the tech giant carries out a recall for Galaxy Note7s. [NEWSIS]

Recalls for the Galaxy Note7 begin today in Korea through all the three mobile carriers.

Recalls in the United States start on Wednesday.

The earlier a customer bought the phablet, the sooner he or she will get a new Note7 with a guaranteed “problem-free” battery. Samsung advises customers check on inventories of replacements before visiting a smartphone vendor - SK Telecom, KT and LG U+ - for a recall.

There are three different periods for the exchanges. Customers who placed pre-orders with mobile operators and received devices on Aug. 19, the first day of deliveries, can get replacements from today through Friday.

Customers who got their devices between Aug. 20 and Aug. 24 can get a new model between Wednesday and Saturday.

The last batch - people who took ownership of the phablet from Aug. 25 till Sept. 2, the day Samsung announced the recall for the Note7 - can get a new phone between Saturday and Sept. 30.

Even if the Note7 is broken, the exchange will be made without additional charge.

SK Telecom, the biggest of the three mobile operators, will provide free deliveries for customers from its online mall. Customers merely have to call a service center at 1599-0224 for the free delivery.

Samsung expects an absolute majority of Note7 owners to take new devices instead of asking for a refund. The period for refunds, which began Sept. 3, ends today.

Of 2.5 million Note7s preordered or delivered worldwide, 400,000 are in Korea. Samsung aims to finalize the recall process by the end of this month and resume global sales of Note7s on Sept. 28 to continue its competition with rival Apple.

The American tech giant said on Sept. 14 that initial inventories of the iPhone 7 Plus - the larger model - sold out even before Apple started selling the new smartphone in stores Friday. All colors were sold out, it said, and the smaller iPhone 7 also sold out in the new color, jet black.

Samsung’s Note7 beat Apple to the market by several weeks. It was getting rave consumer reviews until owners started reporting problems with the battery overheating, sometimes causing fires or explosions. One family in St. Petersburg, Florida, said a Galaxy Note7 left charging in their Jeep had caught fire and destroyed the vehicle.

Samsung has received 92 reports of the batteries overheating in the U.S., including 26 reports of burns and 55 of property damage, according to the U.S. Consumer Product Safety Commission’s website. It said property damage included fires in cars and a garage.

Samsung’s voluntary recall on its home turf starts four days after U.S. safety regulators announced a formal recall of Note7s. About 1 million Note7s have been sold in the United States, according to Samsung.

“Because this product presents such a serious fire hazard, I am urging all consumers ... to take advantage of this recall right away,’’ said Elliot Kaye, chairman of the U.S. Consumer Product Safety Commission.

Samsung has been criticized for not offering clear enough information about the problem or how it would be resolved. While speaking with reporters, Kaye appeared to blast Samsung for not coordinating with his agency.

“As a general matter it’s not a recipe for a successful recall for a company to go out on its own,” he said, adding that anyone who believes a unilateral effort would be sufficient “needs to have more than their phone checked.” Meanwhile, Samsung said on Sunday it sold stakes in ASML Holding, Seagate Technology, Rambus and Sharp “to focus on its core business.” The value of the stakes sold is estimated at around 1 trillion won ($894 million.)