The brutal summer of 2016 lives on in skyrocketing veggie prices

The brutal summer of 2016 lives on in skyrocketing veggie prices 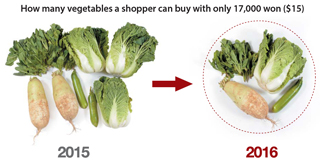 Prices of napa cabbages, a Korean staple and key vegetable for making kimchi, are soaring on the eve of the Chuseok holiday. A head that cost an average of 3,904 won ($3.48) last month at stores now costs 8,035 won, according to the Korea Agro-Fisheries and Food Trade Corporation. Some stores are even selling single cabbages for more than ten thousand won.

Statistics from the Seoul Agro-Fisheries and Food Corporation show that the average wholesale price of high-quality napa cabbages in August at the Garak traditional market in Songpa District, southern Seoul, went up to 1,525 won per kilo (692 won per pound), which is 124 percent higher than a year earlier and 92.5 percent higher than the average price over the past five years. Prices jumped twice from 1,304 won per kilo at the beginning of August to 2,157 by the end of the month. The price hit 2,874 won per kilo in the first six days of September.

According to a report by the Bank of Korea Gangwon branch, there are two main causes. First, cultivation areas for napa cabbages have shrunk due to global warming and Chinese imports of kimchi.

Shipments usually takes place between July to September, hence the name summer napa cabbage. The main cultivation areas are higher altitudes of Gangwon Province. The plants grow in a chilly climate between 18 to 21 degrees Celsius. Global warming has decreased the amount of land suitable for growing napa cabbages, and imports of Chinese kimchi have decreased demand for Korean kimchi, accelerating the shrinkage of napa cabbage cultivation area in Gangwon.

The second reasons for the spiking prices, according to the BOK, were this summer’s heat wave and drought. Between July and August, rainfall in the biggest napa cabbage area, Daegwallyeong, was 38.4 mm, about ten percent of the average for those months, 352.3 mm. Along with the heat wave, pests proliferated, decreasing production by 30 percent.

The shortage in supply has pushed sellers to ship low-quality napa cabbages which would otherwise have been discarded. Park Jong-pil, head of the economic investigations team at the BOK’s Gangwon branch, explained, “Summer napa cabbages are normally discarded if they don’t get sold until Chuseok because they’re sensitive to the cold. But since even the low quality cabbages are currently selling at a high price, it is very likely that they will be sold at market.”

Park speculated that prices will remain high until October. “Prices may fall to a certain degree,” said Park, “but kimchi manufacturers are trying to get their hands on the raw material in wholesale markets to carry out their supply contract, so prices will stay above average until October when the semi-highland producers ship their second season crops.” A kimchi manufacturer typically obtains raw materials straight from the producer. But with only 70 percent of the usual harvest, manufacturers have to fill in the rest through wholesale markets.

Prices are expected to drop after October, which will be a relief to households. “The autumn napa cabbages harvested from the semi-highlands are growing well,” explained Park. “Prices should stabilize from October when the autumn products are put out to market.”

But napa cabbages isn’t the only produce whose prices are soaring.

The prices are making it tricky for Koreans to prepare a ceremonial table for the Chuseok holiday. A typical Chuseok table consists of 20 dishes, at least two of which are fresh produce. Park Mi-sun, aged 64, visited the Yeongcheon traditional market in western Seoul and complained. “Some people are too naive,” she said, “saying that it costs between 220,000 won to 230,000 won to prepare a Chuseok table. It will cost at least 300,000 won.”

“The cultivation area for napa cabbages has shrunk,” said Park Jong-pil, head of the economic investigations team at BOK Gangwon branch. “And the joint effects of the drought and heat wave helped pests proliferate and plant disease spread.”

The same goes for other vegetables. The Korea Agro-Fishers and Food Trade Corporation reported. “The record-breaking heat wave dried up green vegetables, so shipments decreased. Demand is going up because of Chuseok and prices are soaring high.”

Some households are looking for substitutes for expensive vegetables. Internet posts are introducing recipes that different kinds of cabbage to make kimchi. “I ran out of the kimchi that I brought from my mother’s house last year,” said Lee Ji-hye, a 32 year-old housewife, “I don’t dare to make some myself because it’s too expensive. I used to put white radish kimchi on the table for Chuseok, but I’m planning on replacing that with a different kimchi because both napa cabbages and white radishes are too expensive.”

The situation is affecting businesses that make and deliver Chuseok foods to homes. They have resorted to replacing spinach with other greens such as premature napa cabbages, water parsley and seasoned aster.

“Ingredient prices have gone up by 25 percent compared to last year, so I had to fire five part-time workers and get help from my family,” said Hwang Mi-ae, chief executive officer of Daedaero Sangcharim, a ceremonial meal agency. “There has to be a green vegetable on the Chuseok table, so I’m using premature napa cabbages because spinach is too expensive and rare.”

“Prices will probably stay above average in early October but should stabilize if demand decreases and shipments increase after Chuseok,” said Kim Sung-woo from the Korea Rural Economic Institute.