Earthquakes leave many in Gyeongju exposed

Earthquakes leave many in Gyeongju exposed 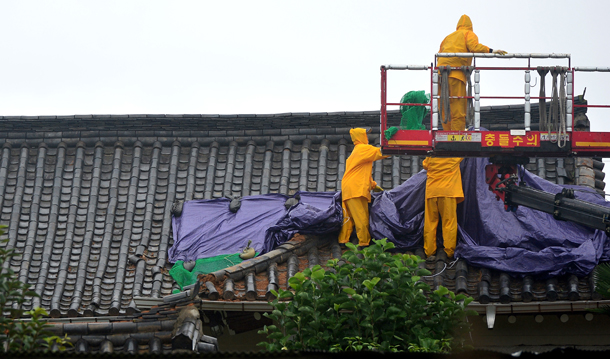 Construction workers place a tarp over the cracked rooftop of a home in Gyeongju, North Gyeongsang, on Sunday, to prevent secondary property damage from leaks under continued rainfall in the city after the earthquakes and aftershocks shattered rooftops and ruined many structures. [NEWSIS]

With many of the rooftops in Gyeongju on Sunday remaining covered in blue tarps to shelter residents from rainfall seeping through the cracks, people here say they’ve had a most unusual Chuseok holiday after two strong earthquakes, the largest Korea has seen in nearly four decades, and ensuing numerous aftershocks hit the city since Monday.

“I can’t remember how the days went by, honestly,” said Jung Hae-yoon, a 67-year-old resident of the city who lives in a house with a tiled rooftop, one among some 18,000 in the city. “I went up to the rooftop on Saturday to examine the tiles, afraid the rooftop may collapse completely, and injured my ankle when I fell.”

She gingerly massaged her ankle, now bound in bandages.

“All throughout the Chuseok holidays, I slept fully suited up so that if I needed to make an escape in the middle of the night, I could do so,” said a resident in her 60s. “I packed all my valuables and important documents in a bag and had it next to me at all times.”

She added, “Who knows whether the blue tarps that the local government office provided to keep out the rain will hold the rooftops from falling in during another aftershock?”

After the city was hit by 5.1-magnitude and 5.8-magnitude earthquakes, the largest since 1978, it has been experiencing aftershocks incessantly, though in lessening degrees.

At least 4,483 cases of property damage have been reported so far, including 2,166 cases of broken rooftops, and 1,099 cases of cracked walls.

According to the Cultural Heritage Administration on Sunday, 60 historical and cultural sights in Gyeongju were damaged. These include the Cheomseongdae Observatory, which tilted slightly to the north 2 centimeters (0.8 inches), and a slight damage to the Dabotap Pagoda of Bulguk Temple.

The Ministry of Public Safety and Security announced on Saturday that it will provide some 4 billion won ($3.5 million) as special subsidy tax to North Gyeongsang, Gyeongju, Ulsan, Busan, Daegu, and South Gyeongsang to assist with their reconstruction efforts. Some 780 reports of property damage have been reported in Ulju County, Ulsan, as of Sunday.

At a meeting on Sunday at the National Assembly, the Ministry of Public Safety and Security and members of the Saenuri Party discussed options to speed up reconstruction efforts, including declaring Gyeongju and neighboring regions a disaster area, a measure requested by local governments of Gyeongju and North Gyeongsang since Thursday.

Although some 1,400 emergency workers have been dispatched to the city and North Gyeongsang to assist with repairs, much of the area still appeared in need of immediate assistance on Sunday.

Amid the rooftop tiles shattered and strewn in alleyways and the cars smashed with tiles in front of a local community center in Hwangnam-dong, residents appeared shaken.

“How can I spend a happy holiday this season when rooftops are coming down throughout the town?” said a man in his 50s who lives in Hwangnam-dong, an area concentrated with Hanok houses. “I cannot eat in peace in my own home, so I went to my relatives’ place in the central city area over the holidays.”

“I am afraid the roof may fall in on me during the night,” said a woman in her 80s. “The roof above my room already came down some 2 centimeters.”

She added, “I sent my kids home over the holidays as soon as possible, too.”

The aftershocks are likely to continue for a while.

“While the aftershocks have been reducing in number and degree,” said Yoo Yong-gyu, head of Earthquake and Volcano Monitoring Division of the KMA, “we do not know when they will end.”