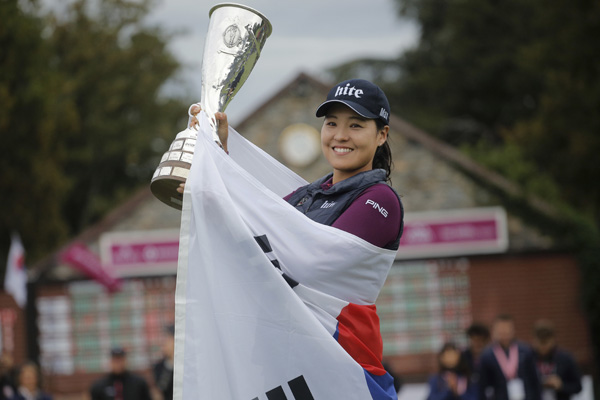 Chun In-gee of Korea holds up her trophy after winning the Evian Championship on Sunday at Evian Resorts Golf Club in France. Chun made history by shooting 21-under for the entire tournament, the lowest of any major event regardless of gender.

For Korea’s Chun In-gee, all she needed to go from No. 7 in the world to No. 3 was a wire-to-wire victory at the most recent LPGA tournament. But to be fair, it didn’t come easy. After all, Chun successfully worked her way up the Rolex Rankings by winning a major event, and in a record-breaking fashion.

In the final LPGA major event of the season, the Evian Championship at Evian Resorts Golf Club in France, Chun outshot her countrywomen Park Sung-hyun and Ryu So-yeon by four strokes to claim her second major championship title. In the final round on Sunday, the 2015 U.S. Women’s Open champion shot 2-under 69 to conclude the entire event 21-under 263, the lowest record set in major championship history, regardless of gender. The previous record for men’s major tournaments was 20-under and for women’s 19-under par.

The final day turned out to be an unpleasant one for all those on the course, with a gusty wind and pouring rain blocking golfers’ sight as they took their shots on the field. Chun was not unaffected by the weather, either, and it was perhaps because of the weather that she shot 69, the worst of all four rounds on Sunday. However, Chun had kept a steady pace in the previous round, keeping herself at the top of the leaderboard throughout the first three rounds which relieved her of some of the burden in the final round.

“Lots of rain this morning. [It] looked not good but I enjoyed,” she said about the weather during the interview after the tournament.

Indeed, despite the weather on the final day, Chun parred most of the holes while carding three birdies and taking only one bogey.

“I was so nervous after the third shot so my caddy David Jones told me try to enjoy…he said you can try make the par,” Chun said. “I know 19-under par is a tied record before the final round. It was more pressure for me, but I tried to think about it as a really good experience. I tried to more enjoy it.”

When asked about her record, she said, “I don't know, because I feel like I'm dreaming now.”

As a rookie, Chun has gone without a single win this year. The closest she got to the trophy was earlier in the season from late February to mid April. In the three events she participated in, including another major tournament, the ANA Inspiration, she finished as runner-up behind the victors. But during this period, Chun was halted briefly by an unfortunate accident that kept her sidelined. Just before the HSBC Women’s Championship in Singapore during the first week of March, she had a mishap at the airport. Reportedly, the father of another Korean LPGA golfer, Jang Ha-ha, dropped a bag down an escalator and it struck Chun, injuring her back. Chun had to sit out for a couple of weeks due to the injury.

But regardless of the brief setback, by aggregating a total of 1,223 Rolex Rookie of the Year points, Chun is going home with another prize from this year’s LPGA, the Rookie of the Year award. Gaby Lopez of Mexico is in second with 427 points but she will not be able to catch up with Chun during the remainder of the season to take the honor for herself.

In addition to the newly set major record, the victory also makes the 22-year-old the second player in the LPGA history to win her first two titles in major events. Her compatriot and her former coach during the Rio Olympics, Pak Se-ri, was the only other LPGA golfer to have accomplished the feat. Pak had claimed her first two wins from the 1998 McDonald’s LPGA Championship, predecessor of current KPMG Women’s PGA Championship, and the 1998 U.S. Women’s Open.

After Chun, Park, a non-LPGA member, has gained 5.83 by finishing as the runner-up and climbed two ladders up in the Rolex Rankings from 12th to 10th. This is the first time Park is ranked within the top ten. Due to the win, Park also secured full membership for next year’s LPGA tour.