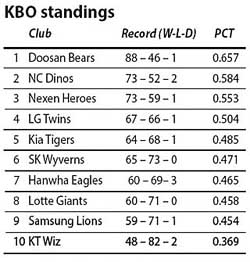 For Kia Tigers’ manager, Kim Ki-tae, the greatest foe this season is the team’s disabled list

For Kia Tigers’ manager Kim Ki-tae, nagging injuries among players are his worst enemies this season.

Kim has counted the days until Na Ji-wan, the Tigers’ cleanup hitter, was to return by Sunday. But during the Tigers’ game against the Hanwha Eagles on Sunday, Na was nowhere to be found. “I don’t know when he will return,” Kim said. “I haven’t heard anything from the rehab team.”

The Tigers, who are trying to secure their spot in the coming postseason, have been plagued by injuries, especially recently. In September, many of their key players had to be opted to the team’s disabled list (DL), starting with Na. Na complained about pain in his lower stomach on Sept. 7, which put him in a 10-day DL. He’s in a rehab stint now, but no one knows when he will return. An Chi-hong, who played only four games after he was discharged from the military, is also on the DL.

But that was just the beginning of the tsunami that was to come. Paik Yong-hwan, starting catcher, was taken out for the season during the game against the LG Twins on Thursday. While tagging a runner out, Paik crashed into the Twins’ Son Joo-in and tore his knee’s ACL. “The recuperation is expected to go for six to seven months,” said a staffer from the Tigers. “He won’t be out until well into next season.”

Along with these key players went the Tigers’ momentum. Since Sept. 7, the Tigers have been in limbo, grabbing only three wins while suffering seven losses. They gave up the fourth position in the standings to the Twins and the odds of keeping their fifth-place position seem bleak at best.

During the Chuseok holiday, the Tigers played in five games while averaging only 2.4 runs per game. After recording 11 hits on Sept. 13, the Tigers as a team had less than 10 hits for the next three games. Without a doubt, they are in desperate need of Na’s return, who batted .309 with 25 home runs and 87 runs batted in this season. 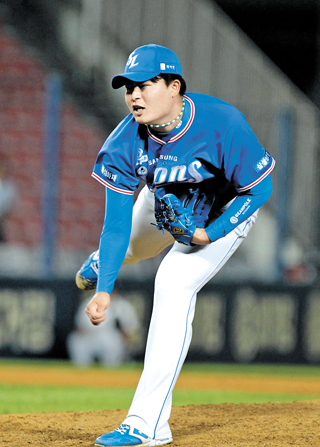 Sim Chang-min is a veritable flame thrower for the Samsung Lions.

He was given the assignment in May when the Lions closers were short in supply due to injuries and transfers.

Although the assignment came to him quite suddenly, making the 23-year-old reliever the youngest closer in the history of the Lions, Sim has proven to be the perfect fit for job throughout the season.

Initially, many thought Sim was simply a temporary closer. How well he would do as the final relief was anyone’s guess.

But in the 55 games he’s pitched in, Sim has clinched 2 wins, five losses, 20 saves and four holds. His 2.74 earned run average (ERA) is also the lowest of the closers among the 10 clubs in Korea.

No one questions that Sim is now the regular closer for the Lions.

In fact, there are only two other closing pitchers in the KBO with an ERA less than three to match the Lions young closer.

“The six blown saves I have are rather disappointing but I consider them growing pains,” Sim said about taking the closing assignment for the first time in this year’s mid season. “I had a rough year in 2014 (52 games, five wins, two losses, eight holds and 6.81 ERA). My game is improving. Good things do come out of failure.”

He added, “Pitching just an inning is more difficult than I expected. Starters have the burden of starting off well, of course, yet the responsibility among relievers can be shared. But the closer has to take all that on his own shoulders. I mean, there is no middle ground, you either save it or blow it.

"But I learned a lot from Oh Seung-hwan [Saint Louis Cardinals of the Major League] and Lim Chang-yong [KIA Tigers]. After all, they’re ranked No.1 and No.2 in the KBO for saves. Playing alongside them, not many of us are privileged with such an experience.”