This year’s red carpet is all modern elegance

This year’s red carpet is all modern elegance 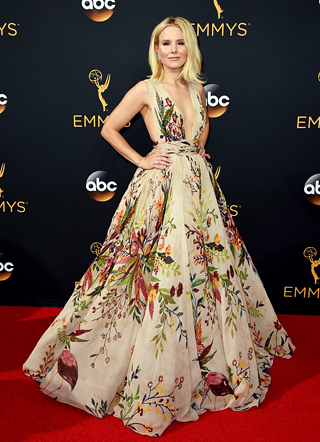 “She was dressing for two and got the proportions just right,’’ said Rickie De Sole, fashion market director for W magazine.

“It was sexy but not overtly sexy. That’s why she’s so successful on the red carpet. It was unexpected and fun,’’ De Sole added.

Also earning raves: Sarah Paulson in an emerald green, low-cut encrusted Prada gown as she walked the carpet with Marcia Clark, the prosecutor she played on FX’s “People vs. O.J. Simpson.”

“It felt very unexpected, very red carpet but modern in its silhouette,’’ Do Sole said.

Kristen Bell went with a low-cut champagne-colored chiffon ballgown with just enough sparkle running through its floral print at the Microsoft Theater in Los Angeles.

Bell’s crystal-flecked gown from Zuhair Murad matched her wheat-colored locks, worn loose and wavy. Pryanka Chopra, meanwhile, smoothed her dark locks back and went for red from Jason Wu with side cutouts, twirling her princess skirt wearing a lip shade that perfectly matched the gown.

“I loved the fit, the one shoulder and the way it cinched her waist,’’ Beverly Hills fashion stylist Joseph Katz said of Chopra’s princess moment. “It just popped on the red carpet. And the twirl. That’s what it’s all about, showing the flow and movement. She nailed it.’’

Ariel Winter sparkled in silver that hugged her curves and Sarah Hyland wore bold, black cigarette pants with a white embroidered floral strapless top. It had a split back and two long sections as a train, from Monique Lhuillier.

Kelly, with her sweetheart neckline, was on trend with her velvet look, after several designers rolled out velvet at New York Fashion Week. So was Kathryn Hahn in emerald green velvet with a deep V-neck and metallic lace detailing.

“I chose it because I just love, like, no bra, just kind of after two children, just a saggy boob in the heat,’’ Hahn joked. “That’s what kind of sold it for me. I thought it had a bit of a Scarlett O’Hara, whipped-it-up-with-the-curtains kind of feel.’’

Kelly’s designer was Paule Ka. Hahn wore Wai Ming. Both kept their jewelry to a minimum, with Kelly in elegant drop diamond earrings. Hahn’s look crossed at the back, lending some pizzazz.

Hyland’s gown sported an icicle motif and celebrated her curves as she spoke about the importance of body positivity.

“Everybody’s bodies are beautiful,’’ she said.

Ellie Kemper, meanwhile, celebrated in a bright, citrus yellow Jenny Packham that cinched at the waist, just a few weeks after having a baby. Her hair was smooth as silk and swept to the side as she smiled for photographers. Her jewels were from Neil Lane, including dainty diamond and gold drop earrings.

“It’s life changing,’’ Kemper told E! of the birth of her son in early August.

Angela Bassett stood out in lemon yellow with cape sleeves and a full train. Another standout: Shiri Appleby in an optimistic sky blue sparkler.

Not all the fashionistas were full grown. Millie Bobby Brown, Gaten Matarazzo and Caleb McLaughlin, the bite-size kid trio from “Stranger Things,’’ had a ball at the Microsoft Theater, soaking up their red carpet moment together in fancy duds.

Wearing green ruffles with her black eyeglasses was the little star from “Blackish,’’ Marsai Martin.

Tracee Ellis Ross was in the white-dress camp, flinging a train around the carpet in a one-shoulder cream silk gown from the Ralph Lauren Collection. It wasn’t the best fit, sagging at a crucial cutout at the waist, but she wore a killer pair of huge diamond earrings that helped deflect the problem.

In standout white was Anika Noni Rose, a Tadashi Shoji chiffon Grecian gown with just enough embellishment at the neck. The waist pulled in, lending even more dramatic fullness to the skirt.

The guys had a few moments of their own. Terrence Howard of “Empire’’ wore a black-and-white check dinner jacket with a patterned bow tie. His lapels were solid black, like his trousers and pocket square. Rami Malek, who stars in “Mr. Robot,’’ went for a white dinner jacket, his big blue eyes lending all the color he needed.

Fred Armisen camped it up in a black tuxedo with Frankenstein bolts on his neck.

In the “we’re-not-so-sure department,’’ Gwendoline Christie sported a huge butt bow and more big, busy embellishment at the front. Also Anna Chlumsky from “Veep’’ in a sacklike look with awkward off-the-shoulder bits and a clunky train.

“That, um, yeah, it wasn’t flattering,’’ Katz said of Chlumsky. “The color was pretty. She definitely took a risk." AP