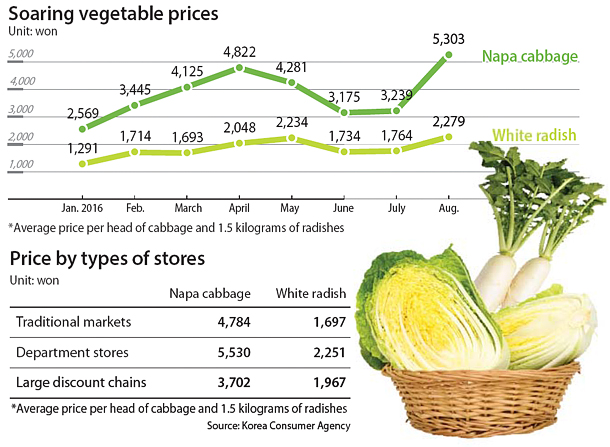 The average price of napa cabbages at local retail stores rose significantly last month compared to the previous month as the supply likely dropped due to the abnormally hot weather that hit the country this summer.

“We don’t know the exact reason for the rise in some vegetable prices, but we believe that the supply in general dropped due to the high temperature and drought,” said KCA researcher Kim Eun-ji.

Additionally, a recent report by the Bank of Korea attributed the long-term rise in cabbage prices to Chinese imports of kimchi.

Samgyeopsal, or pork belly, one of the most popular meats among Koreans, was 11.2 percent cheaper at 2,005 won per 100 grams, while beef prices rose 3.8 percent to 8,601 won. The fall in pork prices is mainly due to the base effect from June, when prices rose 22.2 percent month on month, ahead of the summer vacation season in Korea.

The KCA analyzed the price of 402 major products in 373 stores across the country, and the agency found that the price varied by types of stores.

In fact, the average price of napa cabbage sold at corporate run retail stores was the highest at 6,965 won, and was lowest at large discount chains at 3,702 won.

Onion prices had a 77.2 percent gap by store type, KCA said. The price of 1.5 kilograms of onions was 2,429 won at traditional markets and 4,303 won at department stores.

Beef, napa cabbages, radishes and onions were some of the products that were cheaper at large discount stores and traditional markets in July.

Meanwhile, the year-on-year growth rate for napa cabbage was 84.5 percent, the highest among major products sold in retail stores and traditional markets. It was followed by beef (25.5 percent) and radishes (15.6 percent). The price of pork, on the other hand, fell 14.2 percent year on year, and onion prices dropped 13.2 percent during the same period.

“The price varies by the store types and the government will provide the retail prices online [www.price.go.kr] so that people can research the price and promotion events ahead of their shopping,” said Kim at the KCA.