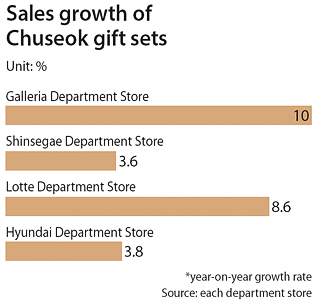 Going into last week’s Chuseok holidays, expectations were low in the retail sector due to a prolonged economic slowdown and a soon-to-be-implemented anti-graft law that will make expensive presents unlawful.

Against all odds, however, four major department stores in Korea enjoyed growth in the sales of holiday gift sets. To skirt an anti-graft law known as the Kim Young-ran Act, which goes into effect Sept. 28 and bans the exchange of gifts costing more than 50,000 won among civil servants and even journalists, the stores offered lower-cost gift sets.

Shinsegae Department Store saw a sales increase of 3.6 percent in Chuseok gift sets sold between Aug. 26 and Sept. 13. Products or sets cheaper than 50,000 won saw an increase of 7.8 percent while more costly items only rose 2.9 percent.

The Kim Young-ran Act was not the only factor in holiday spending.

An unprecedented heat wave during the summer on top of a prolonged economic slowdown prompted many consumers to buy health supplements, which are cheaper than agricultural and marine products.

Shinsegae, which is known for its extensive and affordable wine selection, said sales of wine rose the most - 40.5 percent - followed by health-related items, which rose by 20.8 percent year-on-year.

Health-conscious products were the most popular at Lotte as well, enjoying a 28 percent year-on-year increase in sales.