How a shipping giant went under

How a shipping giant went under 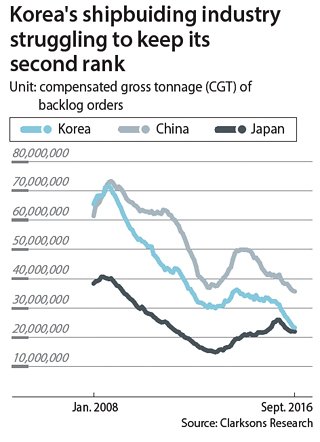 Weeks have passed since the nation’s largest, and world’s seventh-largest, shipping line filed for court receivership, and the question still bugging many observers is how an industry giant like Hanjin Shipping went down so quickly and how great an impact its fall could have on other companies.

“The shipping industry is one of the nation’s key industries that influences not only logistics but also diplomacy, security and new maritime businesses,” said Lee Dong-hyun, a professor at Pyeongtaek University’s department of international trade and logistics. “But [the government] only assessed the industry from a financial point of view and was narrow with giving support.”

Lee referred to the government’s plan to save the economy after the 1997 Asian financial crisis as one of the measures that pushed shipping companies into a difficult situation. During the crisis, Korea had to seek a bailout from the International Monetary Fund, and the Financial Supervisory Service, the nation’s financial regulator, ordered 53 conglomerates to adjust their debt ratio to below 200 percent.

In the container-shipping industry, because ships can cost up to tens of billions of won, or tens of millions of dollars, companies cannot purchase vessels without taking out loans. So in order to satisfy the regulatory agency’s debt ratio, shipping companies had to sell their core assets.

After Hanjin Shipping sold its vessels and healthy assets, industry conditions improved, but the company was unable to handle the increased demand after shedding most of its assets. The company had no choice but to lease ships and pay shipowners high charter rates, which are currently tying up Hanjin’s finances.

Yeon Gang-heum, an economics professor at Yonsei University, pointed to the appointment of Choi Eun-young as chairwoman of Hanjin Shipping after her husband, Cho Su-ho, suddenly passed away in 2006 as the start of the company’s downfall.

Hanjin Shipping had only 69 vessels in 2009. After market conditions improved for a short period of time, Choi rapidly increased investment. By the first half of 2013, the number of vessels had grown to 104. Over the course of that investment, Hanjin Shipping’s debt ratio jumped from 155 percent to 1,445 percent.

Since the company had risked debt banking on the market’s future recovery, Hanjin Shipping was hit hard when the market betrayed expectations. China’s slowing growth and the global financial crisis gave the shipping market little chance of recovery.

All the extra vessels that Hanjin Shipping had accumulated under Choi’s leadership went unused.

In 2014, unable to keep the company safe from a liquidity crunch, Choi abdicated her post to Hanjin Group Chairman Cho Yang-ho, the brother of her late husband.

Cho injected trillions of won in an attempt to save the ailing shipping affiliate but to no avail. Global shipping market conditions never fully recovered, and on Aug. 31, Hanjin Shipping filed for court receivership. Its sinking has already started to reshape the global shipping industry, as other players are eager to acquire the volume that Hanjin used to carry.

The mergers and acquisitions largely stem from a race to the bottom playing out between global shipping lines to lower costs. As the only survivors get to maintain business, the companies are trying to enhance competitiveness by increasing their size.

“Hanjin wasn’t able to survive, and global shipping lines are now in intense competition to take over the volume Hanjin used to cover,” an industry source said. “The next to be hit are shipbuilders, as there is already an oversupply of ships and Hanjin’s ships would only add to that supply.”

When Hanjin’s 64 container ships enter the secondhand market, orders for new vessel construction may further decline. The nation’s shipbuilding industry once boasted the record of world No. 1 by backlog orders, but the crown was taken by China in 2008. Japan is now closely tailing Korea for the No. 2 spot.