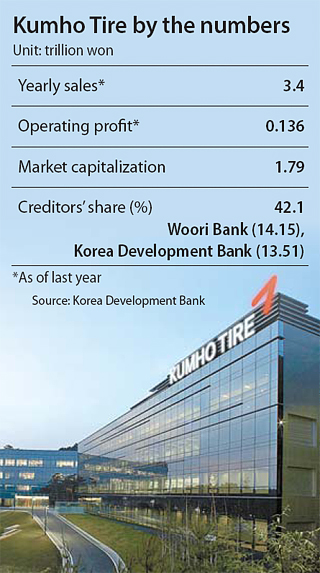 Creditors of Kumho Tire will put up an official notice of sale for the company today and start accepting letters of intent from investors.

The company is the 12th largest tire manufacturer in the world in terms of yearly sales and the manufacturer is expected to become the hottest item on the Korean M&A market in the second half of this year.

Kumho Tire’s main creditors, who currently hold 42.1 percent of the company’s shares, announced the plan for a public notice of sale on Monday. Woori Bank holds 14.15 percent of shares and the Korea Development Bank has another 13.51 percent.

The sales price of 42.1 percent of the company’s shares add up to 754.9 billion won ($674 million) as of Monday, and the total sale price, including management rights, is expected to exceed 1 trillion won, industry insiders said.

In fact, the company’s share price has risen 68 percent since the beginning of the year to close at 11,350 won on Monday in anticipation of the new deal.

The creditors plan to accept preliminary bids as early as November and choose preferred bidders through an official process in January. All eyes are on whether Kumho Asiana Group’s Chairman Park Sam-koo and Park Se-chang, his eldest son and president of the group, will be able to take back the company.

Kumho Tire and Kumho Industrial are two of the key subsidiaries of the group that ran into a debt workout program in 2010. Chairman Park was able to take back its management rights for Kumho Industrial after exercising the right of first purchase.

A source close to the chairman has said, “Our will to acquire Kumho Tire hasn’t changed at all from the past.” In fact, the father and son have a guaranteed right of first purchase promised by the company’s main creditors after it announced that it will go through a workout program, and Chairman Park has pitched in 113 billion won from his pockets to participate in the process of increasing capital by issuing new stocks in 2012.

However, industry insiders are pessimistic about Park’s chance of taking back the company, as there are more hurdles this time compared to the Kumho Industrial case. For Kumho Industrial, foreign enterprises weren’t able to participate in the bidding price, since its subsidiary company Asiana Airlines is treated as a government-related business.

Kumho Tire, on the other hand, doesn’t have any government regulations that restrict foreigners from participating in the bidding process.

Details of an agreement of a right of first purchase are also different this time. In the case of Kumho Tire, the agreement guaranteed Park’s right to offer a price and gave him the right to calculate the price for management rights.

Chairman Park successfully lowered the price of management rights and reacquired Kumho Industrial for 722.8 billion won, some 30 percent lower than the 1 trillion won many have expected.

However, he doesn’t have the rights to negotiate the price this time and he already has some 500 billion won of debt after acquiring Kumho Industrial, which makes many believe that he won’t be able to come up with the 1 trillion won to buy back Kumho Tire.

“We will look carefully into how creditors proceed with the sale,” a spokesman for the chairman said.