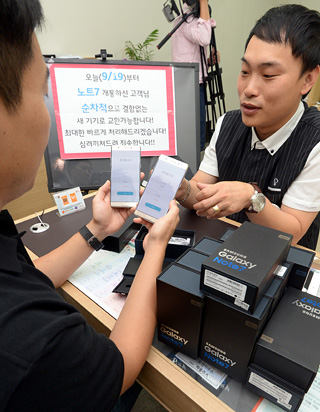 A Galaxy Note7 user consults with SK Telecom’s staff regarding the model’s recall on Monday at the vendor’s store in Gangnam District, southern Seoul. [NEWSIS]

The recall of Samsung Electronics’ Galaxy Note7 phablets went smoothly on Monday, the first day the tech giant offered to replace the one-month-old, potentially dangerous phones with problem-free ones.

Samsung Electronics distributed 100,000 new Note7s to smartphone vendors run by SK Telecom, KT and LG U+. The carriers and Samsung have yet to unveil how many recalls were made on Day 1.

“We released one fourth of the entire volume sold since Aug. 19 today and today’s recall data will help us project roughly when the recall process will wrap up,” said a Samsung spokesman.

Some smartphone vendors said they’ve run out of replacements. An SK Telecom vendor in Myeongdong, the shopping district in central Seoul, said the 20 units given to her ran out in the morning.

Some stores operated until after the normal closing hour of 8 p.m. to deal with customers visiting after work.

The method of recall differs according to the telecom operator. People who bought a Note7 from SK Telecom and KT must get their replacements at the store that sold them the phone. LG U+ subscribers can go to any phone shop operated by the carrier.

Even broken Note7s can be replaced and users don’t have to surrender the accessories that came with the phablet. But the replacements must be the same color as the original.

To help distinguish the new Note7s from the old one, Samsung has changed the color of the battery gauge on the display from white to green. The company is also giving out a gift voucher to affected customers that will give them a credit of 30,000 won ($27) on their mobile bill next month.

Samsung offered full refunds to Note7 owners until Monday. The percentage of customers requesting a refund is estimated at below 5 percent, according to SK Telecom. Samsung also lent Galaxy A and J smartphones to Note7 users until Sunday.

The Note7 is the most advanced Android smartphone available in Korea and people here are extremely loyal to Android devices. Over 90 percent of all mobile devices are Android, leaving little room for Apple’s iOS operating system. Even though Apple’s latest flagship iPhone 7 was released last week in many countries around the world with much hype, Koreans won’t be offered them until the end of next month at the earliest.

Still, the Note7’s chances against the iPhone 7 are clearly diminished after the battery problems and recall.

“The impact of the recall on Samsung’s brand image and credibility is deemed limited,” said Kim Dong-won, an analyst with Hyundai Securities. “Samsung’s preemptive measures to cease Note7 sales and to carry out recalls are seen to positively influence consumer confidence on a long term.”

The recalls are scheduled to last until the end of this month. Samsung is discussing with mobile carriers to extend the deadline to March for those customers who are either too busy or lazy to get a new Note7.

Realizing that some customers will continue to use the original Note7s, Samsung is releasing to a software upgrade to be available starting 2 a.m. today. It will limit battery-charging capacity to 60 percent.

“When the battery is charged up to 60 percent, or 2,100 mAh, the shortage of energy inside the battery lowers the possibility of any hazard occurring,” reads a text message Samsung sent to all of its Note7 customers.

The mandatory upgrade is actually expected to spur reluctant Note7 owners to replace their phones. Recalls in countries that sold small amounts of Note7s have already begun.