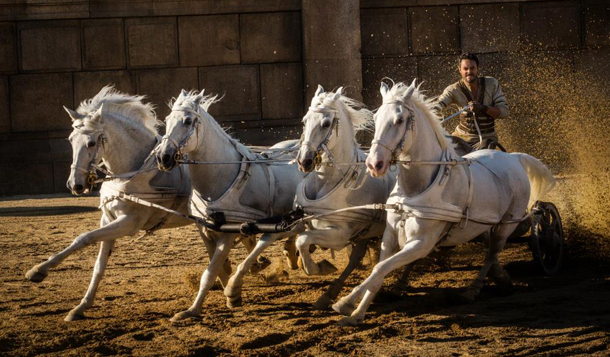 The Hollywood remake “Ben-Hur” came in second over the five-day Chuseok holiday in the local box office. [LOTTE ENTERTAINMENT]

The Warner Brothers Korea release “The Age of Shadows,” directed by Kim Jee-woon and starring high-profile actors Song Kang-ho and Gong Yoo, handily led a normally subdued Chuseok holiday from Wednesday to Sunday, continuing its run at the top of the box office in its second weekend, according to the Korean Film Council on Monday.

The movie has raked in 49.9 billion won since its release on Sept. 7 and sold more than six million tickets as of Sunday.

The Hollywood remake of the classic film “Ben-Hur” came in second during the five-day holiday with 873,688 ticket sales, despite some critics panning its lack of creativity. It reached 500,000 admissions three days after its release on Wednesday, the start of the Chuseok holiday.

On the same day, another Hollywood remake, “The Magnificent Seven,” hit local theaters. Featuring Korean actor Lee Byung-hun alongside Denzel Washington and Chis Pratt as one of seven outlaws who fight against an industrialist, the Western action flick ranked third, selling 644,089 tickets.

Disney’s “Alice Through the Looking Glass,” the sequel to 2010’s “Alice in Wonderland,” and the American-Chinese animation “Rock Dog,” distributed by Huayi Brothers and Summit Entertainment, each came in fifth and sixth.

NEW’s controversial animated film “Lost in the Moonlight” slipped to seventh place. The Korean animation has been accused of being too similar to Hayao Miyazaki’s “Spirited Away” (2001).

Another Korean animation “Foosball” came in eighth, and two other animations, “Aikatsu! Music Award: Minna de Shou wo MoracchaimaShow!” and “Robinson Crusoe,” followed with the next two spots.