Gov’t may not give aid to flood-stricken North

Gov’t may not give aid to flood-stricken North 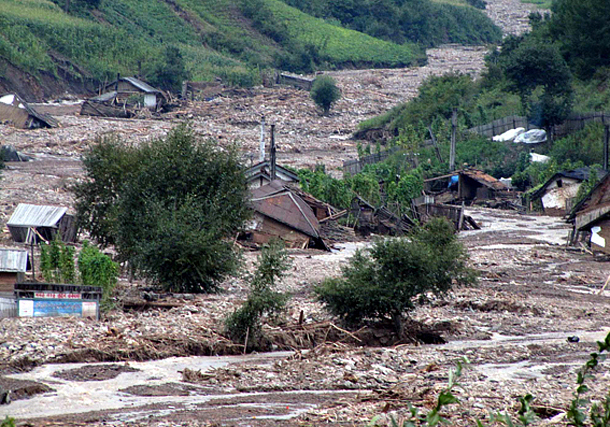 A photo, released on Thursday by North Korea’s state-run web portal Naenara, or “My Country,” shows an area in North Hamgyong Province in a rare display of the severity of damage inflicted by the five-day floods that began on Aug. 29. [NEWSIS]

An official assessment of flood damage in North Korea’s North Hamgyong Province should be made to determine whether to offer relief support, the South Korean government said Monday.

“It is a matter that calls for a careful approach,” Jeong Joon-hee, spokesman of the Unification Ministry in Seoul, which handles inter-Korea relations, said during a regular briefing, “one that takes into consideration the extent of the damage needed for immediate relief and transparency for aid programs, as well as North Korea’s official request for such relief.”

Jeong’s remark came amid myriad reports from North Korea over the consequences of heavy floods that swept the northernmost province between Aug. 29 and Sept. 2, leaving 60 dead and 25 missing as well as rendering 44,000 people homeless, according to North Korean media reports.

North’s state-run media ran a number of detailed reports, showing TV footage of homes submerged underwater, reflecting the gravity of the situation there. The Korean Central Television went so far as to call the five-day flood the “first major catastrophe since liberation” from Japanese colonial rule in 1945.

While noting an official assessment should precede Seoul’s decision to offer assistance, spokesman Jeong also pointed out that Pyongyang must issue an official request for such help. He said while he felt it was unlikely for the North to make such a request, it would be hard for the government to provide aid given the North’s latest nuclear underground test earlier this month, which has infuriated Seoul and its allies.

“There has been no official request from the North so far and I don’t think there will be one in the future,” said the official. “Even if there is one, I would say the possibility of the government handing out relief goods is rather low taking into account the current situation.”

In the aftermath of the flood, said to have been the worst to hit the country in five decades, North Korea has sought help from international relief organizations even as it carried out its fifth nuclear test on Sept. 9.

International aid agencies dispatched relief goods to the affected area. The spokesman for the UN’s World Food Programme (WFP), partaking in the relief program, said Friday that “some of the worst-affected areas have not yet been reached due to damage to roads and bridges,” and emphasized, “many more people may need assistance in coming weeks.”