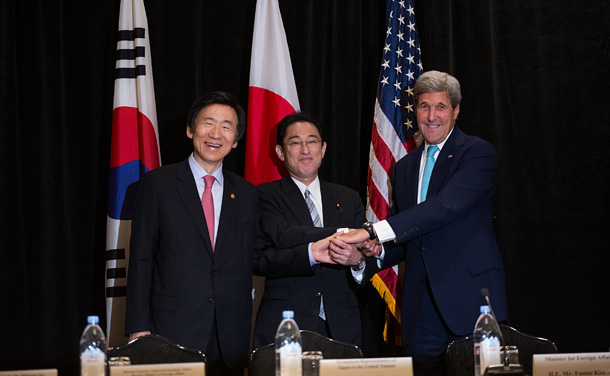 The top envoys of South Korea, Japan and the United States released a joint statement calling upon “even stronger international pressure” on Pyongyang for its fifth nuclear test, which could include additional unilateral sanctions, after holding trilateral talks in New York on Sunday.

Along with discussing the new resolution being developed by the UN Security Council to impose further sanctions on North Korea, the three countries said in the statement that they also “considered other possible measures of their own, in particular ways to further restrict revenue sources for the [Democratic People’s Republic of Korea’s] missile and nuclear programs, including through illicit activities.”

This is in addition to the UNSC Resolution 2270, adopted in March following North Korea’s fourth nuclear test on Jan. 6 and subsequent long-range missile launch one month later, which enacted the strongest-ever sanctions on the regime.

They also discussed how to ensure all countries “fully and effectively implement” Resolution 2270, as the North is engaging in an “accelerated, systematic and unprecedented campaign to develop an operational nuclear capability.”

Kerry, according to the statement, said Washington remains steadfast in its “commitment to provide extended deterrence, backed by the full range of its nuclear and conventional defense capabilities” to Seoul and Tokyo. His remarks, pledging that the United States will continue to extend its nuclear umbrella over the region, come amid growing political debate in South Korea over whether it needs its own nuclear armament to counter Pyongyang’s growing threat.

“The Security Council must swiftly adopt a robust new sanctions resolution and prove its credibility and authority,” Yun said during his Sunday meeting with Kerry and Kishida.

“Kim Jong-un and the North Korean regime cannot get away with all their misbehavior and provocations,” he warned. “If they blindly insist on going down that road, it will be the very path to ruin.”

Yun recalled that the North fired 22 ballistic missiles of all types this year alone, adding that Pyongyang “is now at the final stage of nuclear weaponization” and pointing out this was an “unprecedented challenge” for the international community.

He also highlighted the importance of trilateral cooperation with Tokyo and Washington and said, “As the key stake-holders in this nuclear conundrum, the three of us will continue to muster the collective will of the international community.”

Kerry likewise emphasized to his Korean and Japanese counterparts that “the alliance, the obligations, the mutual interests that we share and our efforts to protect them could not be stronger.” Washington, he said, will “make it clear to a reckless dictator that all he is doing through his actions is isolating his country, isolating his people, depriving his people of genuine economic opportunity and that the global community will not be intimidated.”

“We have said many times that we are prepared to sit down with the DPRK to deal with the issues of nonaggression, of peace on the Korean Peninsula, of joining the international community, of attracting assistance and economic development,” said Kerry, “provided North Korea is prepared to talk with the rest of the world about responsible approaches to the question of nuclear weaponry and a nuclear program.” Kishida also alluded to unilateral sanctions as he said, “Our three countries should work closely to apply stronger pressure on North Korea through Security Council resolutions, including further sanctions as well as taking our own measures respectively.”

Yun and Kishida held separate bilateral talks later Sunday, and further concentrated on discussions for bilateral collaboration on strong measures against North Korea for its fifth nuclear test, according to the Korean Ministry of Foreign Affairs on Monday.

Kishida also emphasized the need for a bilateral General Security of Military Information Agreement, or GSOMIA, according to Japanese media reports Monday. Seoul has been hesitant to sign onto a bilateral agreement to share intelligence directly with Tokyo, though it has agreed to a trilateral information-sharing agreement with Washington as an intermediary.

U.S. President Barack Obama was scheduled to hold talks with Chinese Premier Li Keqiang on the sidelines of the UN General Assembly in New York on Monday and discuss North Korea’s nuclear and ballistic missile provocations. Obama was expected to urge Beijing to exert its influence on Pyongyang.

A group of 19 U.S. senators led by Republican Sen. Cory Gardner of Colorado sent a letter to Obama on Friday calling for the president to “expand U.S. sanctions against North Korea” and those entities that assist the regime, namely China-based ones.

It also called to impose additional multilateral sanctions against Pyongyang through a new UN Security Council resolution, and to close previous loopholes that have allowed China to “skirt faithful compliance” of UNSC Resolution 2270.

The letter urged Obama to firstly “designate entities that are assisting the North Korean regime,” especially those in its main trading partner, China.

This letter also called for the rapid deployment of the Terminal High Altitude Area Defense (Thaad) system in South Korea, which has been opposed by Beijing, and strengthening of the trilateral alliance between the United States, Japan and South Korea.

President Park Geun-hye is also expected to send a message on the North Korean nuclear issue in a Blue House meeting with her senior aides on Thursday.