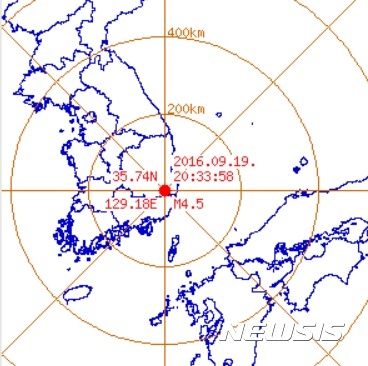 A 4.5-magnitude aftershock struck Gyeongju, a Unesco World Heritage Site in North Gyeongsang about 370 kilometers (230 miles) southeast of Seoul, on Monday at 8:33 p.m., precisely a week after two larger quakes hit the same city, the Korea Meteorological Administration said in a statement.

There were no immediate reports of casualties or serious damage.

Tremors were mostly felt in the nearby cities of Busan, Daegu and Ulsan.

Last Monday, two large earthquakes of magnitude 5.1 and 5.8 struck Gyeongju, sending off tremors across the country. The 5.8-magnitude quake was the largest since 1978, when the government started monitoring seismic activity.

There were no deaths, but around 25 people reported injuries, mostly from falling as they were trying to flee their homes.

There were at least 364 aftershocks of magnitude 1.5 to 3.0 and 14 aftershocks between 3.0 and 4.0 since last week. The Korea Meteorological Administration said smaller earthquakes will likely continue for at least several more days.

The widely-used mobile messenger app KakaoTalk, which went out of service for hours last week after the 5.1-magnitude quake, did not experience any disruptions this time.