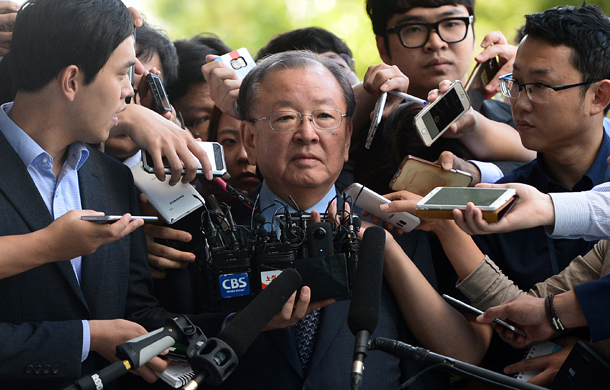 Kang Man-soo, 71, former chairman of Korea Development Bank, stands stone-faced in front of the Seoul High Prosecutors’ Office in southern Seoul on Monday as reporters surround him before questioning. [NEWSIS]

Kang Man-soo, 71, former chairman of Korea Development Bank (KDB), showed up Monday for questioning at the Seoul High Prosecutors’ Office on suspicions of pressuring Daewoo Shipbuilding & Marine Engineering (DSME) to invest in a biotech company run by his close aide.

Kang’s appearance was the latest development in the prosecution’s probe surrounding DSME and KDB, launched in March with massive media coverage when the Financial Supervisory Service revealed a major accounting fraud. Kang led the KDB between March 2011 and April 2013.

The financial watchdog accused DSME of faking accounting records to take out around 45 trillion won ($40.2 billion) in loans from KDB, which holds nearly half the company’s shares. Prosecutors have since increased both speed and scale of their investigation. Kang, who served as minister of strategy and finance during the former Lee Myung-bak administration from February 2008 to 2009, allegedly forced the Daewoo company to sign a research deal with the biotech firm that promised 5.5 billion won worth of investment.

The financial transaction halted in mid-2013 upon Kang’s retirement. By then, 4.4 billion won had been invested by DSME. Prosecutors suspect the former chairman had abused his influence because the partnership, aimed at developing bioethanol production techniques using marine algae, was irrelevant to Daewoo’s main field of work.

Kang acknowledged his involvement in the research deal but said he simply “recommended” it. When reporters showered Kang with questions on Monday as he walked into the prosecutors’ office, the ex-chief denied once again any wrongdoing.

“While in public service, I’ve never done anything shameful,” he said. “I believe I’ll be freed of all accusations. As someone who devoted his entire life to the nation, [the allegations] are personally hurtful.”

Prosecutors will also grill Kang on whether he forced Hansung Enterprise, a fishery and seafood producer, into investing 500 million won in the biotech company in exchange for receiving favorable loans from KDB, an allegation about which Kang claims to have “absolutely no knowledge.”

The chairman of Hansung Enterprise is known to have graduated from the same high school as Kang.

Another allegation is that Kang pushed DSME to outsource five billion won worth of work to an architectural company led by his relative, to which he also pleaded innocent.