Bassett settles into new home with the Orions

Bassett settles into new home with the Orions 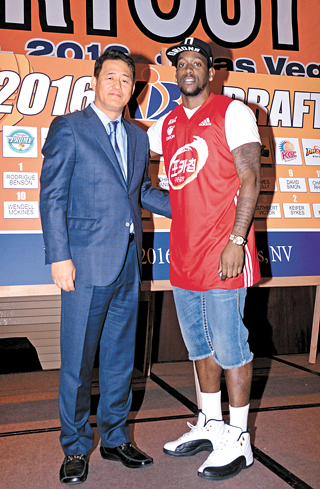 The Goyang Orion Orions head coach Choo Il-seung, left, poses for photo with O’Darien Bassett, the newest addition to his team, after the 2016 KBL draft. [NEWSIS]

The Goyang Orion Orions had one key agenda during their off-season camp in Japan earlier this month - see what the new foreign player O’Darien Bassett is made of.

The American is the newest face of the Orions, having joined the team during the 2016 Korean Basketball League (KBL) foreign player tryout and draft in July. As the defending champions, the Orions needed a talent to replace Joe Jackson, a point guard from last season who led the team to claim its first KBL title. Aaron Haynes, a veteran scorer of the KBL for the Orions, stayed on. But Jackson left after the season to try his skills elsewhere.

Jackson’s absence leaves some large shoes to fill. As the lead guard for the team, Jackson scored 23 points on average during the final series while tallying seven assists and 3.8 rebounds. His explosiveness in the court brought more fans to the gymnasium and the popularity of the Orions went through the roof throughout the season.

Now with Jackson gone comes Bassett, and the question is whether he is enough both on and off the court to meet the Orions’ dire need.

And based on the pre-season camp alone, he might just be what the Orions have been looking for.

After seven exhibition games against Japanese teams, the Orions came home last week with a record of two wins and five losses. Not a scorebook befitting the defending champs of the KBL, but head coach Choo Il-seung was more than satisfied, especially considering how things turned out with Bassett.

Mishaps and unexpected turns of event mired the Orions’ pre-season training overseas. Key players such as Lee Seung-hyun, Heo Il-young and Jang Jae-seok were absent from the team to play in the International Basketball Federation Asia Challenge 2016 for Korea. Haynes, a forward, sat on the sidelines during the games after joining the team late for training. Kim Dong-uk, one of the team’s veterans, said, “I thought the training in Japan was pointless with key players, including Haynes, unable to participate in the games.”

But Choo, a proven tactician and the skipper, disagreed. “We need a process to see what Bassett can do and his style of play,” Choo said. “This is what the exhibition games are for, so the players to get to know each other.”

For now, Choo is content. Bassett’s performance on the court was more than enough to leave his new coach and teammates smiling, but in addition to his basketball prowess, it was his character that everyone complimented.

“He’s got the speed and driving skill,” the Orions guard Jung Jae-hong said.

“He’s also friendly, so it shouldn’t take long for him to adjust to the new team and environment.” Cho Hyo-hyun, another guard, added, “He’s a good ball handler and he’s got the fundamentals down. It will be hard to stop him on the court.”

Although Choo did not shy away from commending the newest addition to his roster, the head coach was also careful in his evaluation.

“I think other players will be able to get used to Bassett’s style of play quickly,” he said. “But as we have seen with Jackson last year, everything comes down to how fast Bassett can find himself at home in the KBL.”