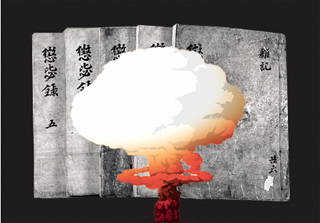 The earthquake that hit the Gyeongju area in North Gyeongsang scared the entire country. But a nuclear attack would be far more horrifying. In fact, Korea has suffered three catastrophes as terrible as a nuclear bomb in its history. They were not inevitable. They could have been prevented if we had been prepared.

The first was the 1592 Japanese invasion. If the country had been as prepared as Yi Sun-shin, we would have been able to drive the Japanese invaders away. Ryu Seong-ryong’s “Jingbirok” chronicles the Imjin War. After the king fled, Koreans were killed by the Japanese and died of starvation. Ryu wrote that after the Japanese forces left, “the capital reeked of the odor of dead bodies rotting.”

The second catastrophe was the Japanese occupation in 1910. Our ancestors had failed to modernize, unlike Japan.

The third was the Korean War in 1950. When the country was divided, South Korea lacked military armament.

The first occurred during the agricultural period, the second during modernization and the third during industrialization. Back then, Korea was able to overcome the damages and bring the country together.

But today is different. We are living in the age of an information revolution. Once we fall behind, it is hard to catch up. If a nuclear bomb is dropped on Seoul, Koreans may have to live in a dark age for a long time, even if we win the nuclear war.

Our readiness against a nuclear threat determines the fate of the nation. Israel risked a war and eliminated the seed of danger. In 1981, Israel destroyed a nuclear reactor in Iraq. Air Force pilots made a 1,550-mile round-trip to confirm the location and strike.

But Korea is different. We have been cowardly, incompetent and naïve. We have had illusions of talks and peace. South Korea was tricked by North Korea and offered a big amount of money, helping its nuclear development in the end.

The most notable case was the $450 million that the Kim Dae-jung administration provided. In the year following Kim’s retirement, the case was tried. The ruling showed what happened during the administration without the citizens’ knowledge. A secret deal was made with North Korea, Hyundai was used to facilitate the deal, and the nation’s financial, foreign exchange and information systems were exploited.

The case had four shocking elements. The crucial one is that the nation provided a large chunk of taxpayer money to a hostile party with nuclear ambitions. Two months before the summit meeting, Pyongyang demanded South Korea’s special envoy, Park Jie-won, pay $1 billion in return for the meeting. Seoul and Pyongyang negotiated and agreed on $450 million.

North Korea recently conducted its fifth nuclear test. The National Intelligence Service (NIS) reported to the National Assembly that the test cost about $5 million. The $450 million given to North Korea would allow it to test 90 times.

The second shocking element is that the entire process was above the law. Special envoy Park, NIS chief Lim Dong-won and the presidential secretary for economic affairs, Lee Ki-ho, provided the government’s share of $100 million to Hyundai to facilitate the deal.

Later, when the company did not have money, Lee offered help. He pressured Korea Development Bank (KDB) head Lee Keun-young to issue loans. At the time, Hyundai Merchant Marine was about to be restructured due to conflicts among the heirs. It was 5.7 trillion won ($5 billion) in debt.

But the bank issued a 400 billion won loan to this unstable company without properly investigating the loan limit, financial situation or collateral.

Hyundai Merchant Marine lied that this suspicious fund was being used to buy a ship. It was the same tactic used by Daewoo Shipbuilding and Marine Engineering in its scandal.

The third shocking element is that dozens of Blue House, NIS, KDB, Korea Exchange Bank and Hyundai officials were involved, and most knew that the large sum of money was being paid in return for a summit meeting. But no one objected. No one questioned the consequences of providing a regime with nuclear ambitions with hundreds of millions of won.

The last shocking part is related to what’s happening today. Park was the envoy who played a leading role in negotiating with North Korea. He was found guilty. Regardless of the ruling, he provided financial help for North Korea’s nuclear development. Today he is head of the second-largest opposition party. Now, Park is most actively opposing deployment of the Terminal High Altitude Area Defense system.

Historical lessons show that the decision was the 2016 version of “Jingbirok.” Future generations have blamed ancestors for failing to prevent dangers. Our future generation will resent us for courting danger instead of preventing it.