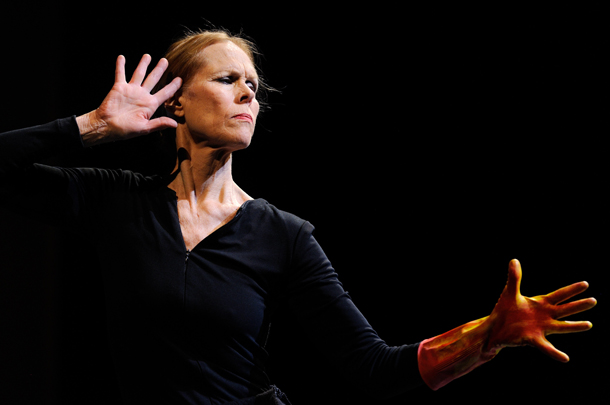 Known as the “queen of contemporary dance,” Carolyn Carlson will be staging a performance as part of this year’s SIDance festival at the Seoul Arts Center. The American dancer will be one of three dancers performing in a showcase of solos titled “Short Stories.” Carlson will appear in “Black over Red (My Dialogue with Rothko),” a piece inspired by the works of painter Mark Rothko. See THEATER, below. [LAURENT PAILLIER]

Sept. 28: Known as the “queen of contemporary dance” and the “alive jewel,” Carolyn Carlson will once again mesmerize audiences when she takes the stage with Chinatsu Kosakatani, a member of her dance company, and Wom Won-myeong, a renowned Korean dancer who has worked with Carlson for several years. Under the title “Short Stories,” the show consists of solo performances from each of the three dancers.

The show kicks off with Koakatani’s performance of the “Wind Woman,” describing the movements and traces of the wind.

Then comes Carlson, who will perform “Black over Red (My Dialogue with Rothko),” a piece inspired by the works of painter Mark Rothko (1903-70), who was famous for expressing what he felt were divergent tendencies through contrasting colors.

The final performance, “Burning,” by Wom, explores how humans inevitably discard and replace bits and pieces of their lives through the characteristics of fire.

Friday to Tuesday: Mozart’s seminal opera is back with its cheerful and emotional air that transcends generations. The simple and friendly melodies, forming a harmony with deep religious music, will once again let the audience savor the colorful beauty of opera.

Known to be Mozart’s last opera, “The Magic Flute” is acclaimed by later composers as perfect in musical composition, a magnum opus that encapsulates the composer’s genius and musicality.

This year’s show is drawing much attention with its distinguished vocalists. World-renowned tenor Kim Woo-kyung, who has been well received at the world’s top opera theaters including the Metropolitan Opera in New York, the Royal Opera House in London and La Scala in Milan, will be taking on the main role of Tamino.

There are no shows on Saturday and Monday.

To Oct. 3: “Sweeney Todd” tells the story of a barber who, with the help of his accomplice Mrs. Lovett, attempts to get revenge on the fiendish Judge Turpin. 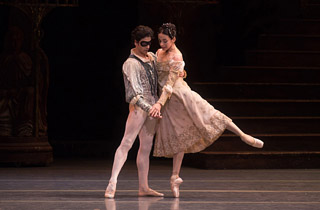 Alessandra Ferri, former principal dancer of the American Ballet Theatre, and Herman Cornejo, current principal dancer, will be coming to Korea to take the stage on Oct. 23 and 26.

Today: The Yonsei Classic special concert series has been held every month on the third Wednesday since March at Kumho Art Hall Yonsei and has invited a variety of classical musicians.

Kuchl led the Vienna Philharmonic and Vienna State Opera for 45 years as concertmaster from 1971, taking up the post when he was just 20. He has performed with renowned maestros including Karl Bohm, Leonard Bernstein and Carlos Kleiber. In 1973, he founded the Kuchl Quartet, presently known as the Vienna Musikverein Quartet.

In August, Kuchl retired from the Vienna Philharmonic, and this will be his first recital in Korea since retirement. Kuchl will perform his favorite pieces by composers from Mozart to Tchaikovsky. 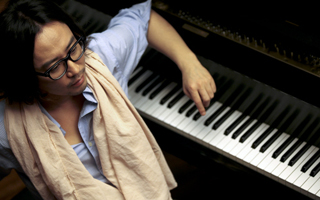 Friday to Sunday: Five years after its last concert, Antenna, the talent agency of singer-songwriter Yoo Hee-yeol, is back with its third big event encompassing various artists from the agency.

Jung Jae-hyung, Lucid Fall, the Peppertones and five other singers will be participating. Yoo himself will perform on stage under the name Toy.

The concert was originally scheduled just for the weekend, but due to popular demand, tickets sold out quickly. As a result, the agency decided to add one more day, Friday.

Under the agency motto “Good People, Good Music,” special collaboration pieces among the artists will be performed.

Sunday: It is rare to find a talented female double bassist in Korea like Kwak Se-hyun. After graduating from Seoul National University, she went on to the University of Texas at Austin and recently returned to her motherland with a Ph.D. in music.

To celebrate her comeback, Kwak is holding a recital at Kumho Art Hall in central Seoul. The program includes Bach’s “Cello Suite No. 1 in G Major,” Hindemith’s “Sonata for Double bass and Piano” and Proto’s “A Carmen Fantasy for Double Bass and Piano.” Kwak will be accompanied by pianist Park Cho-rong.

Nov. 24: Pierre-Laurent Aimard, a world-renowned French pianist known for performing a wide spectrum of classical and contemporary music, is making his second visit to Korea. This year’s concert will focus on the composers who heavily influenced Aimard in his musical career: Gyorgy Kurtag (1926-) and Olivier Messiaen (1908-92).

The concert’s first half will focus on Kurtag, whose music Aimard loved so much that he flew off to Hungary to learn composing from the artist. Aimard will play “Passio sine Nomine”, a piece dedicated to the French pianist written by Kurtag himself in celebration of Kurtag’s 90th birthday, along with the Hungarian composer’s “Jatekok” and “Szalkak.” The second half is dedicated to Messiaen, who taught Aimard and was awed by his talent.

In a letter Jang wrote while he could not sing, he was full of tears, and now finally, he feels like a flower after being able to sing again.

Dongkuk University Station, line No. 3, exit 2,
for the shuttle bus, or bus No. 02 or 420 to
the National Theater of Korea bus stop.