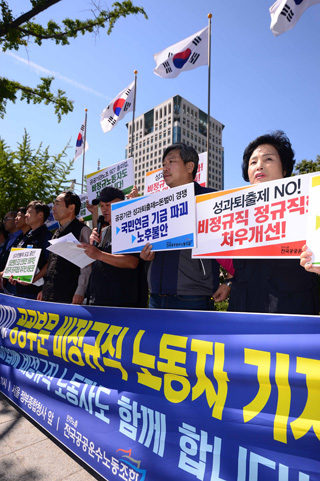 Members of the Korean Public Service and Transport Workers’ Union protest against the government’s plan to expand the merit-based salary system on Tuesday at the government complex in central Seoul. They are contract workers in the public sector supporting the upcoming strike against public institutions. [NEWSIS]

Union members of the country’s major banks will go on strike Friday to protest the government’s push to expand its merit-based salary system, the Korean Financial Industry Union said Tuesday.

The labor group representing 15 commercial banks predicted that almost all of its 100,000 members will participate in the daylong walkout at Seoul World Cup Stadium in Mapo District, western Seoul, signaling a potential industrial disruption at banks.

The strike was spurred by the government’s plan to broaden its performance-based salary program to include junior-level employees starting next year. The union views the move as a way to facilitate easy layoffs and eliminate job security while the Financial Services Commission (FSC), the country’s top financial regulator, says the measure will boost competition.

“The upcoming strike will likely set a record as the largest, since union members are enthusiastic about the ongoing protest,” said Kim Moon-ho, head of the Korean Financial Industry Union.

“As non-regular workers at banks have been converted into contract workers for an indefinite period of time, they joined the labor union. So the participation rate will go up compared to the previous strikes,” Kim said.

The union held a strike in 2014 to protest the government’s bureaucratic interference with the industry. At the time, 30,000 union members attended the one-day walkout.

The Korean Financial Industry Union voted for the strike in July, with 95.7 percent of voters approving. Turnout was 87 percent.

The Korea Federation of Banks, an association representing the banking sector, bowed to the proposed salary program, however, and unveiled guidelines for commercial banks to adopt the new salary system. The new plan will widen the difference between salaries of the top and bottom performers to 40 percent.

Most commercial banks already embraced the performance-based system as part of a government initiative to overhaul the financial industry, but the adoption was limited to executives and senior-level managers. Junior-level employees are still subject to a seniority-based salary system. The union has said that the performance of junior-level workers is heavily dependent on the environment of each branch, so applying a single merit-based program could be unfair.