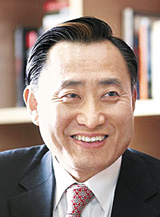 The vacancy will be filled by Lee Hae-sun, former executive vice president at CJ CheilJedang, after a general shareholders meeting scheduled for Oct. 31 confirms the decision.

“With the newly-appointed CEO, we wish to reform into a company that can be trusted by consumers,” Coway said in a statement.

The company has been under fire for selling three types of ice makers and water purifiers that dispensed content containing small quantities of nickel from internal components.

Coway had known about the defect for over a year, but instead of officially notifying customers, the company either secretly replaced parts during regular check-ups or recalled products without giving customers specific details about why.

Earlier this month, the government and civic organizations confirmed the existence of harmful chemicals and requested the manufacturer stop selling the products. Coway said 96 percent of the sold supply had already been recalled, and the company discontinued production.

Consumer sentiment was especially bad since the case coincided with the controversy earlier this year surrounding British household goods manufacturer Oxy Reckitt Benckiser and its toxic humidifier sterilizers that claimed more than 100 lives.

Kim was appointed CEO of Coway in 2013 after private equity fund MBK Partners acquired the company. He was known for raising Coway’s annual revenue from 1.8 trillion won ($1.61 billion) in 2012 to 2.2 trillion won the next year.

Last month, the government announced it had prosecuted Kim for not properly notifying consumers of problems in Coway’s water purifiers.