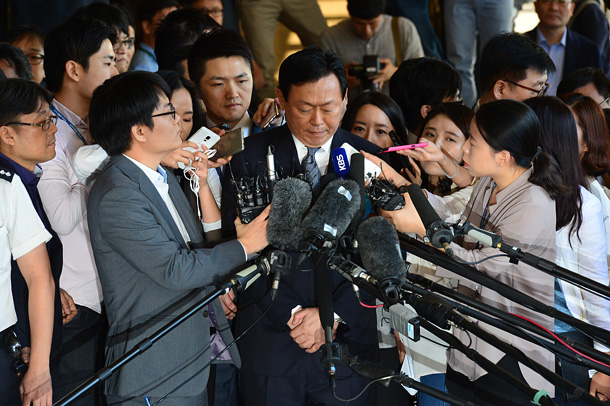 Lotte Group Chairman Shin Dong-bin is surrounded by reporters who hit him with a barrage of questions as he makes his way to the Seoul Central District Prosecutors’ Office on Tuesday. [WOO SANG-JO]

Lotte Group Chairman Shin Dong-bin submitted to questioning by prosecutors on Tuesday concerning the retail giant’s tax evasion over the past years.

Shin, 61, was the highest executive to be investigated by the prosecution since it opened the investigation about 100 days ago. The tycoon arrived at the Seoul Central District Prosecutors’ Office at around 9:20 a.m. and briefly addressed the press. “I am sorry to have concerned the people,” he said. “I will faithfully cooperate with the prosecution’s probe.”

Shin was accused of massive embezzlement and breach of trust. According to the prosecution, Shin ordered Lotte affiliates to take responsibility for losses incurred during the merger and acquisition process of the group. He was also accused of ordering sales of assets to certain affiliates at unreasonably low prices.

The prosecution also said he faced embezzlement charges for having received about 10 billion won ($8.9 million) in annual income after listing his himself as a director of a Lotte affiliate in Japan without providing any services. In total, the business malpractices are estimated to total about 200 billion won, the prosecution said.

The prosecution also suspects that Shin must have been aware of Lotte Chemical’s tax fraud. The company manipulated its accounting records and received about 20 billion won in tax rebates from the government. Shin was the CEO of Lotte Chemical at the time.

The prosecutors also suspect that Shin was involved in the group’s creation and operation of slush funds.

The prosecution plans to question him throughout the day and decide on the necessity of asking a court for a pretrial detention warrant later at night. “We are carefully reviewing the grounds and needs for his detention,” a prosecution source said.

The investigation into Korea’s fifth-largest conglomerate was launched in June, when nearly 200 investigators from the prosecution were dispatched to raid Lotte headquarters, at least seven affiliated companies and executives’ residences. The focus was on the Shin family’s alleged creation of slush funds, embezzlement and other forms of corporate malpractice.

It was the prosecution’s first investigation into a conglomerate since Prosecutor General Kim Soo-nam took office last December. It was also the first time that Lotte became a target of a large-scale prosecution probe since its foundation in 1967. The conglomerate is accused of running slush funds worth at least 56 billion won since 2002 at Lotte Engineering and Construction and restricting business opportunities to the group’s affiliates. The Shin family is also accused of evading taxes totaling some 300 billion won.

While the prosecution successfully went after the group’s years of alleged corporate malpractice, it appeared to fail to find evidence to prove the suspicions that Lotte had illegally lobbied the Lee Myung-bak administration to obtain permits for the massive development project known as “Second Lotte World” in Jamsil.

The probe into slush funds allegations also faced a hurdle last month after Lotte Vice Chairman Lee In-won was found dead just hours before his scheduled questioning. The death was later determined to be a suicide.