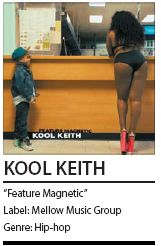 Even as his aliases multiply, Keith Thornton has more than 30 releases under the name Kool Keith alone. His latest, “Feature Magnetic,” is an album featuring collaborations with rappers from all schools of hip-hop.

These guest MCs are a big part of the story. MF Doom is in top form on “Super Hero,” rhyming “Travolta” with “Minolta.” “Stratocaster” has Godfather Don mutilating a dank piano loop. Keith forms “MC Voltron” with Juice Crew stalwart Craig G, trades world-weary rhymes with Sadat X on “Life” and complains about the scene’s “fugaziness” with Boston legend Ed O.G. on “Tired.”

The album was mostly produced by Number One Producer, another of Keith’s pseudonyms. At one point he raps, “People get cozy and sit inside the paragraph.” And it’s true. For all the flamboyance, he’s an MC first, and on “Feature Magnetic” he keeps perfecting that craft. AP