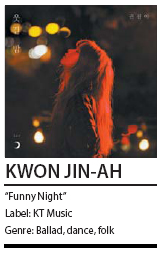 The teenage girl who, with tearful eyes, ended third in the SBS audition program “K-pop Star 3” in 2014 is finally getting her turn to shine with her first studio album.

On the brink of autumn, Kwon warms up our hearts with eight tracks, vocalizing the shaky yet thrilling days of a 20-year-old. Having written or composed half of the tracks herself, the singer-songwriter shares delicate sentiments on “Funny Night.”

The lead single “The End” almost sounds like a heartbreaking letter to a lover, wistfully sensing his love has faded. The mood brightens up with the bouncy melody of “Bite Me,” which highlights Kwon’s witty lyrics. At first, she seems to be talking to a mosquito, a bit annoyed after constantly being awakened by it. But as each word takes us to the next, we realize those sleepless nights were actually spent thinking of her crush.

Kwon practiced the lead single of “Funny Night” 2,000 times before finalizing it. Her budding vibe is polished with the collaboration of trendy musicians like Ra.D, ChaCha Malone, and Jay Park.