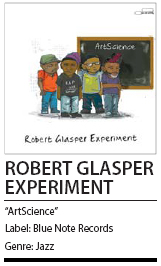 The Robert Glasper Experiment hoists a jazz sail on “ArtScience” for a spirited cruise on seas of soul, dance, funk and pop.

Recorded in New Orleans in two weeks, the self-produced third album was written mostly by the band. They even handled the vocals instead of relying again on stellar guest singers.

Free and easy and unafraid to mix and match, “ArtScience” crosses over but repeatedly returns to its jazz harbor.

“This Is Not Fear” launches the album like a brief rsum. Some post-bop piano and sax open into turntable samples and a live band introduction - Glasper on keyboards, bassist Derrick Hodge, drummer Mark Colenburg and Casey Benjamin on saxes. Vocoder-ized vocals give “Find You” a futuristic tint as spot-on comments on current events from Glasper’s 5-year-old son bring the song very much into the now.

The band won R&B Grammys in 2013 for the “Black Radio” album and last year for a cover of Stevie Wonder’s “Jesus Children of America.” For “ArtScience” the Recording Academy may need a new category. AP