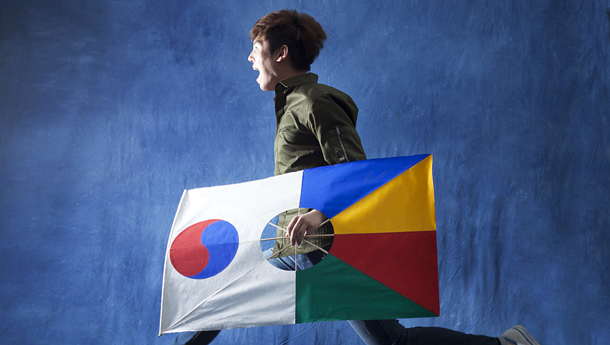 Pansori singer Kim Jun-su, 25, is the youngest member of the National Changgeuk Company. He has been cast as Or-phe in “L’Orfeo” at the National Theater of Korea. [NATIONAL THEATER OF KOREA]

The company has succeeded in diversifying its audiences in recent years by inviting a western director and a hit Korean musical producer to each interpret changgeuk in their own style. This time, they’re presenting changgeuk in the style of western opera.

The National Changgeuk Company is kicking off the theater’s 2016-17 Repertory Season with a changgeuk titled “L’Orfeo,” based on a well-known masterpiece of the same name by Claudio Monteverdi (1567-1643). The opera premiered in 1607 and inspires many musicians and directors today. The story is based on the Greek mythology of Orpheus, the musician who could attract inanimate objects.

After last year’s successful presentation of “Jeokbyeokga,” one of the most difficult pansori, director Lee So-young is at the helm again, taking on a new challenge. 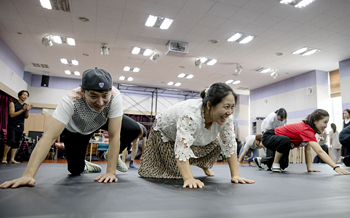 Members of the National Theater of Korea rehearse for opera changgeuk “L’Orfeo,” which combines western opera and Korean traditional changgeuk, at the company’s practice room in central Seoul. The performance runs until Sept. 28. [NATIONAL THEATER OF KOREA]

“I chose ‘L’Orfeo’ because inside the story, there is the main love story but before that there is the coexistence of life and death,” Lee said. “To add, I thought I could search for the direction of our life in this piece.”

The challenge of “L’Orfeo” was portraying the Korean traditional art as an opera. She said emphasizing the style of pansori in the music and the narration of singers has been difficult.

“It is important to retain the charm of both pansori and opera,” said Hwang Ho-joon, music director of the National Changgeuk Company. “For pansori, there is the excessive elaboration of the story, while for opera, it tries to restrain. Thus, with these two very different characteristics, I had to form a good balance in between.”

Even though “L’Orfeo” is an existing opera, the National Changgeuk Company insists its “L’Orfeo” can be seen as a new piece.

Lee changed names to Korean ones, Orpheus to Or-phe and Eurydice to E-ur, trying to convey that the opera has been reinterpreted into a traditional piece.

“Changgeuk is what we have to continuously study, ponder about and invest,” said Ahn Ho-sang, director of the National Theater of Korea. “Thus, presenting another new repertoire of changgeuk, ‘L’Orfeo,’ is such a marvelous matter.”

Pansori singer Kim Jun-su, 25, of the National Changgeuk Company, who is becoming popular among young Koreans after appearing in music shows like Mnet’s “I Can See Your Voice” and KBS’s “Immortal Songs,” has been cast as Or-phe. He is the company’s youngest singer to be cast as a protagonist in changgeuk performances, an attempt by the theater company to snag younger audiences.

JoongAng Sunday sat down with Kim to talk about the unique performance that mixes Korean and western opera and hear about Kim’s involvement. Following are edited excerpts.

A. There’s going to be a lot of singing in chorus. The sound will be very powerful. Singers on stage will be going back and forth, crossing boundaries between changgeuk and a western opera. It’s going to be quite spectacular. Compared to previous changgeuk performances, the stage is also larger in scale.

Compared to previous works like “Jeokbyeokga” that delve deeper into showing the original form of our sori (narrative singing), this opera changgeuk seems to involve more singing. Have you and the other singers decided how far you are going to go with using sigimsae (embellishments to the main melody line of pansori music) in this performance?

Audiences will hear distinct differences between pansori and opera songs. At first, we start off with more melodious songs that can be heard in western opera but toward the end, there is more pansori. We are trying to restrain the use of sigimsae when we have to and use it fully at other times. There are some songs that are somewhere in the middle and that’s where we are having headaches on how to take it and how much sigimsae we should show.

You’ve gained great popularity after appearing on television shows. Artistic Director Kim Seong-nyeo of the National Changgeuk Company seems to be concerned that as people have been praising you for your good looks and talents, you may abandon changgeuk and go into the entertainment industry.

I decided to appear on those music shows because they allowed me to show my sori. I just want to run to those places where they tell me I can show people the beauty of our traditional music. I’m ready as a sori singer to do that anytime, anywhere. The ultimate goal is of course to attract more people to the theater to come and see changgeuk performances.

At first, I was hesitant to go on the shows like “I Can See Your Voice” and “Immortal Songs” because I’m not an independent singer but a member of the National Changgeuk Company. The producers recommended I sing K-pop songs in pansori style. But I was going on the show to sing pansori so I told them I wanted to sing “Second Moon” and “Chunhyangga” and they said yes.

With the National Changgeuk Company, you’ve done a lot of new works. What was the most intense?

Everything was quite new to me. The roles I played had no similar characteristics at all. Genres stretched from comedy to thriller to melodrama. For me, doing comedy was the hardest. My first work with the company was “Baebijangjeon.” I shared the role with veteran pansori singer Nam Sang-il at that time and as a beginner, it was difficult for me to follow and understand his sense of humor. Of course, it didn’t work out like I hoped and I shed a lot of tears off stage. But now that I think of it, such diverse experiences allowed me to be who I am right now.

Growing up in the countryside in Gangjin, south Jeolla, you were taught pansori at the age of 10. Do you have relatives who do pansori?

No. Usually, young boys start to learn pansori because one of their parents or grandparents is a pansori singers. But in my case, no one in my family are in the gugak (traditional Korean music) industry. When I was in the fourth grade, there was this music class where we had to sing a gugak-style song. My teacher told me that I was quite talented in it and I should enter a gugak-singing contest as a school representative. At the competition, I heard great pansori music and that’s when I fell in love with this genre. When I began learning pansori, people around me, including my family and friends, asked me why I’m doing it instead of rooting for me or patting me on the back for cherishing the tradition. But I wasn’t upset. I think I was destined to learn and perform pansori.