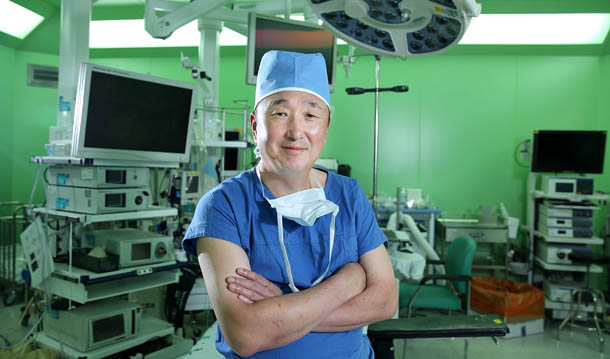 There is no one else in the world that has the skills of Seoul National University Hospital’s chief surgeon Dr. Suh Kyung-suk when it comes to laparoscopic liver transplant surgery.

The surgery technique employed by Dr. Suh is making two incisions that are each one or two centimeters in diameter and another 0.5 centimeter and filling up one of the cuts with air that will allow surgery tools, including ultrasonic shears, tweezers and endoscopes, to be inserted into the body. The liver is then removed from a 10 to 11-centimeter long cut in the lower part of the stomach.

This technique is dubbed the “keyhole” procedure. The more common practice in the past has been a hybrid procedure that used both a laparoscopic surgery and a laparotomy incision. The keyhole surgery, because of the small cuts barely leaves a scar and the cut on the lower body can be covered by underwear. The hybrid method on the under hands leaves a visible scar right down the middle of the patient’s stomach.

In fact 90 percent of the liver transplant surgeries by Dr. Suh are done in keyhole procedure.

“In many of the cases the children offers their liver to their parents,” Suh said. “It hurts me to see the scars of such scars on the young people, especially in the case of young daughters.”

The keyhole procedure not only reduces the visibility of scars but also it allows the patients to recover fast than previous methods. The time it takes in surgery is an hour faster as well, which is why Dr. Suh is relies on such methods.

On his resume the word “first” can be found throughout his career, whether it’s the first in Korea or the first in the world.

As he skills started to be recognized worldwide, other foreign doctors have lined up to learn from Dr. Suh since 2011. There have been 65 people from 18 countries that have visited Dr. Suh to learn of his skills in liver transplant, not only from developing countries like India, Kazakhstan, Georgia and Nepal but also developed countries such as U.S., Japan, Canada and Australia.

Some took a two-day course while others took a one-year course. Interest in learning from Dr. Suh has risen sharply since the Seoul National University Hospital surgeon participated in a live surgery that was shown in real time at the International Liver Transplantation Society’s congress held at the Grand Intercontinental Hotel in Gangnam, southern Seoul, in May.

Dr. Suh was working on a 53 year-old patient who was on the final stage of liver cirrhosis. He transplanted the partial liver of the patient’s 51 year-old wife.

Dr. Oliver Soubrane of Frances’ Hospital Beaujon, who was among the 300 people watching the surgery on screen, said he was surprised at how Dr. Suh was sensitive but at the same time fast during the laparascope procedure, adding that it was like seeing a magic trick.

Next month a doctor from the Cleveland Clinic will be here in Seoul for a two to three week course.

It’s not the doctors that are seeking Suh’s skills. Patients traveling from overseas have been on a steady rise. Since Suh operated on a Mongolian patient in 2010, 12 more people from the country have visited Dr. Suh. In 2012 a Russian patient received operation from the Korean doctor while this year Suh worked on transplanting part of the liver of a 38 year-old woman from United Arab Emirates to her 58 year-old father.

Dr. Suh is even exporting his know- how on liver transplants. Next month he will be traveling to Yagon Hospital in Myanmar to give his knowledge on liver transplantation surgery. He has provided the same services in several hospitals in Kazakhstan.

His technique on living donor transplant were passed down to several doctors in Korea including Lee Kwang-woong and Lee Nam-joon of the same Seoul National University Hospital as well as Kwon Choon-hyuck of Samsung Medical Center and Kim Sung-hoon of the National Cancer Center.

After participating in his first liver transplant surgery under his teacher Dr. Kim Soo-tae in 1988, he went to Pittsburgh in 1990 to further learn the skill of liver transplanting.

The University of Pittsburgh was an epicenter of liver transplants and drew a lot of doctors across the world. There were even times that Dr. Suh was only able to work on the extracorporeal circulation machine, which acts as a substitute to the liver during surgery all day long.

“Because there were so many people in front of me I had to watch [the surgery] while stepping on a platform,” Suh said. “If I step down even for a moment someone would take the place so at times I had to watch for 12 hours straight without moving an inch.”

After 16 years, the roles have been reversed, with other doctors from Texas, Michigan and even Kyoto and Kumamoto, Japan, has come to Seoul to learn his technique.

The JoongAng Ilbo asked Dr. Suh on how much Korean medical skill on liver transplant has improved.


Q. Why are doctors around the world coming to Seoul?


Are there a lot of operations in Korea?

There are no other countries that can compete with Korea when it comes to liver transplants, including laparascope. They say Koreans are skilled with chopsticks [which helps in techniques that require sensitive finger tips]. The number of living donors liver transplant to population is currently No.1 in the world while cadaveric donors to population is somewhere in the middle. When adding both you can say Korea ranks No.2 in the world.


Why did you decide to become a surgeon, especially one that specializes in liver transplant?

Liver transplant is a surgery that dramatically improves the health of a patient who came close to death. It is rewarding as a doctor. It seems resident doctors, who have seen this, volunteer for liver transplant as their expertise later on.

Roughly between 400 to 500 cadaveric donors liver transplants happen ay night and it is tiring because the surgery takes all night. However, it is the spirit of the surgeon that saves lives. I have never regretted becoming a transplant surgeon.


Dr. Suh is one of the so-called early adopters who likes to be the first to try out new skills and technologies. In January of last year he installed an iMac computer with a 27-inch screen in his lab and switched his smartphone to iPhone and even purchased an iPad. Today he looks at medical data from his iMac and connected Apple devices. His tendency to be an early adopter is one of the factor that contributed to him learning the laparascope procedure. He said people around him told him to just do what he does and let younger surgeons learn the new skills.

However, he said it was his hobby to try new methods.

Dr. Suh said he recently received a hand-drawn portrait of himself by a former patient who suffered from acute hepatitis and had to receive a liver transplant from her brother five years ago. Now in her 20s, she has been living a healthy life. Two other patients recently delivered the good news to Dr. Suh that they have given birth. This is a rare moment since liver transplant patients not only have to stop other medication because of the immunosuppressive drug that they take, they have to continuously monitor their liver condition because of transplant rejection.

The 34 year-old mother never forgot to thank Dr. Suh every time he passed by on his routine checkup.

He said she even sent a picture of the baby celebrating the 100th day as well as their family picture.

Dr. Suh, when operating, wears a 3-D glass and closely watches the liver on the display and uses the tweezers and ultrasonic shear. The ultrasonic shear cuts the liver, opens up the blood vessel and seals it. It even install artificial blood vessels when it is needed. The procedure requires sensitivity, including taking out the cut liver and installing the liver to the recipient and then retying the blood vessels. It takes Dr. Suh an average of four to five hours while most other doctors take 12 hours.